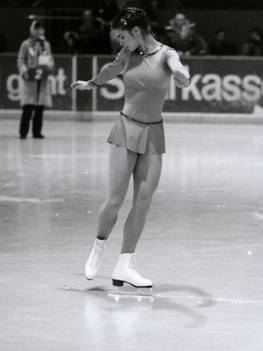 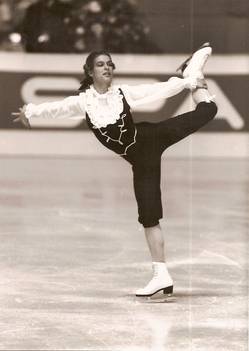 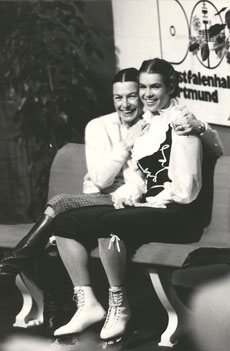 My trainer, Mrs. Müller and I are happy about the successful short program 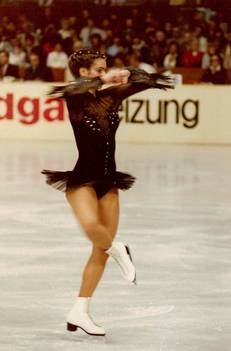 Final pirouette from the freestyle performance of "Rhapsody in Black" 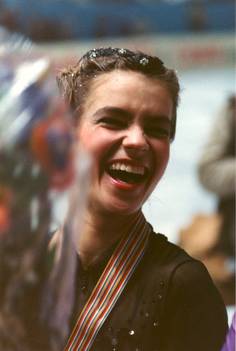 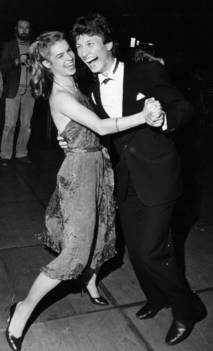 The dancing new "dream couple", the brand new European Champions from the east and the west. Norbert Schramm and I

With fond memories of my very first world championship three years prior, I returned to Dortmund in 1983. This time I had come to this city for the European Championship, and would go home with my first gold medal.

The European Championship in Dortmund

Having placed, up to now, 14th, 13th, 5th and 2nd in the previous European Championships, I had no doubt that now it was time to win. My 2nd place position after the compulsories was an excellent starting point. The flawless short program gave me a little leeway, so that despite a fall in the freestyle, I managed to eke out my first European Championship title. While doing my most difficult jump, a triple Rittberger, I fell down. I'm proud that I took the risk, anyway.

Throughout my entire amateur career, the short program was my greatest strength. Seven elements had to be demonstrated and one single mistake would mercilessly take points away from my score. Yet this enormous pressure helped me to push harder for a maximum performance. The short program is also always a creative challenge for my trainer, Mrs. Müller, and sometimes a provocative one, as well. Now this time, I am skating to a Rondo Veneziano Medley, which among others, includes a melody by Mozart. Because of this, we agree to stay consistent with the theme, and I become "Mozart". Naturally, I am wearing knickerbockers on the ice. I satisfy the jury with a flawless program and win. Afterwards, there was a heated discussion over my outfit. In fact, it was decided that there should be a regulation requiring women to wear skirts for figure skating. Performing the same short program as in Dortmund at the European Championship, I skated a month later at the World Championship in Helsinki as Mozart wearing a skirt! I really felt ridiculous.
For a figure skater, it is tremendously important to feel comfortable in her costume, and in this case, I did not. I felt that the knickerbockers much more effectively underscored the essence of the character I was representing.
During the freestyle competition, I am skating to the music "Rhapsody in Black", and am, of course, wearing a black dress. Like the blue dress in 1979, it, too, was handed down by Anett Pötzsch. This wonderful dress was made for her for role in the skating show "Hello Dolly" in 1980. She only wore it a few times. She had meanwhile ended her ice skating career, and had told Mrs. Müller that it would simply be a shame to keep it hanging in the closet unused, so, a few alterations were made, and presto, it was mine.
Off the ice, traditional waltzes were the source of excitement at the closing banquet. The European Champion Norbert Schramm from West Germany and I from the GDR stepped on each other's feet more than dancing with twinkle-toes. The fun we were having had some of the officials and operatives raising their eyebrows. The press was already alluding to the new "dream couple".