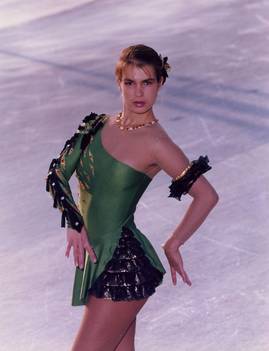 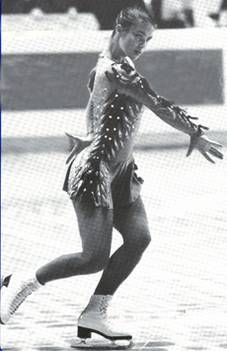 During my new short program to "Flamenco Fantasies" 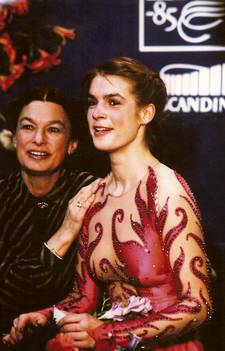 Mrs. Müller and I satisfied with my short program and the score.

This year's season is a bit treacherous for me. Following such a grandiose year, this year's training doesn't seem so easy. In the summer I let it slide a little bit and become a little more womanly in the hips.
Not because of, but despite this, I was determined to defend my 1983 and 1984 titles at the European Championships in figure skating at Göteborg.

Discovering the Sounds of Spain

Because it was normal for me at the time, to continue performing my freestyle program with the same music and accordingly the same costume for two seasons, I am skating this time to the sounds of Gershwin's "Girl Crazy" and "Mona Lisa". Since this particular freestyle had brought me luck in the Olympics the previous year, and we had spent the year improving on it, I had a good feeling about it.

For the short program, Mrs. Müller chose Spanish music for me for the first time. This is how "Flamenco Fantasy" came to life, and together with my long-time ballet instructor and choreographer Rudy Suchy, I discovered for myself that the spirited Spanish music corresponded very well to my own character. I'm very excited about the short program, because I feel that after all the other diverse short programs, like "The Muppet Show", "Star Trek", "Mozart Medley" and Puzsta girl, I can show yet another side of myself: namely one with more character, more fire, and yes, more womanhood to conjure up in the choreography.

Three years later, my freestyle "Carmen" during the Olympic Games in Calgary helped me defeat Debi Thomas, and my passion for Spanish music remains with me even now.

I won again in this year's compulsories, but unfortunately during the short program, a disastrous mistake occurred, a doubled combination, and I took 4th place in this category. Kira Iwanowa from the former USSR and Claudia Leistner from West Germany are my strongest competitors and attempt to take away my title. Having regrettably suffered a score of injuries during the previous season, Claudia gave an astounding master performance on the ice, which didn't make things easy for me. For many years she was among my hardest opponents in Europe.
But because I was in a good position after winning the compulsories, I was able to get over making a mistake in the short program and luckily win the freestyle, becoming the European Champion for the third time in a row.

Guido Dobbratz wrote in the “Piourette”: "Kati and her trainer have once more conjured up memories of the golden Olympic season, donned the same attractive costume, used the same music and applied the same successful combination of athleticism and grace. It paid off, but it required that very bit of luck that only the most competent should be lovely." Oh, how right he was with that bit of luck, and I promise I will train harder for the World Championships in March!