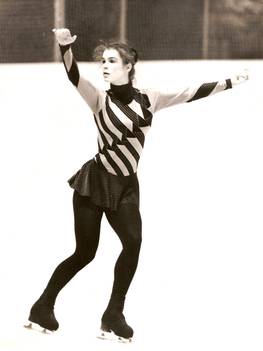 During training in Copenhagen, where one should always be stylish as possible from head to toe. Not just sports clothes. No, the pretty dress is a must. 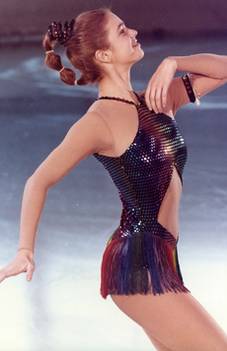 The seemingly risque costume for the short program "Caravan". 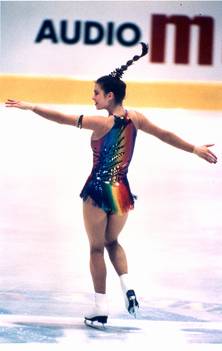 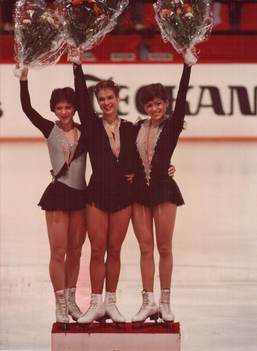 As an exception, all three of us are standing on the podium for the group photo.

During the previous summer, at the age of 19, I moved out of my parent's house, passed my driving test, and had not only my own apartment, but also my own car, which in the GDR at that time were real privileges. For me it meant having a little more personal independence. Not that my parents were ever controlling, but the idea of my own four walls was very enticing at this point, and right away I had two car accidents within a short period of time. Luckily, they were relatively harmless. After just a week, I failed to make the curve into the parking lot and took off a corner of the school wall. Oh my.
I admit, it was difficult that summer to have the right kind of discipline. Everyone else was going to the local swimming pool, while we figure skaters were at the ice rink. Oh well, at least it was a good way to stay cool.

Unfortunately this season, I was battling with an injury, Achillobursitis, on my right heel, which was quite painful and put me behind in my training. Despite this, I won my sixth national title in a row during this season and hoped to secure my European title again.

After the compulsories, I am, as usual, behind Kira Iwanowa, but followed closely by Claudia Leistner from West Germany.

For the short program, Mrs. Müller has once again come up with a pretty unusual idea for me, and put me in an extremely colorful costume with a midriff to skate to the music of the well-known film "Caravan". Unfortunately, I mess up a bit on the jump combination, a triple toe-loop-double Rittberger, fail to make a clean finish on the turn of the second jump, and am very angry at myself. The short program is always my strongest, and now this. After that I receive lots of encouraging telegrams from my family, friends and fans and am glad that sooo many people were wishing me luck.
During my entire figure skating career I was always extremely superstitious, and always had three small lucky charms on the ice, which Gisela, our physiotherapist, had to hold tight. All the other talismans and telegrams were in my bag in the dressing room on site. Even the "BT" newspaper in Copenhagen wrote and played around with my name: “KRITTE-VITTE-WITT-BOM-BOM," "Little bird, little bird, fly". The people of Copenhagen were also wishing me luck.
Before the freestyle competition, everything is wide open: Kira Iwanowa, Anna Kondraschowa, Claudia Leistner and I. Each of us had the chance to win the European Championship. My throne was wobbly, but I know that we all put our pants on one leg at a time.

Claudia was the first one of us four to go out on the ice. At the time, she is in world class form and has planned a difficult freestyle routine with four different triple jumps. The gold medal is definitely within her reach. Shortly before her routine, she has problems with her circulation and in the end botches up the whole program. Neither she nor Kira make it through the freestyle without a fall. Anna, a Russian skater with an instinctive feeling on the ice and a great musical sense, was again hot on my heels. I skate to the music of "West Side Story". For it was the first time we ever had a continuous theme for my freestyle presentation, and I receive the highest score of the evening. And as a reward, I win the European Championship for the fourth time in a row.