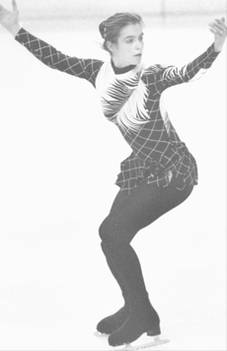 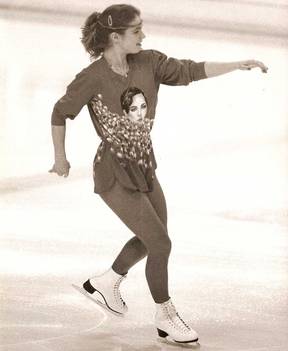 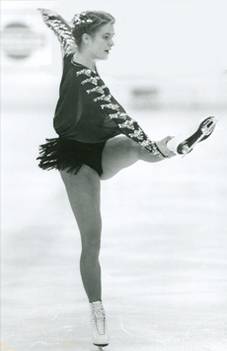 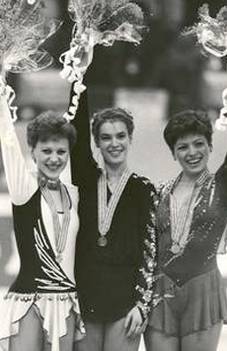 With the fondest memories of my Olympic victory in Sarajevo in 1984, I returned to the Bosnian capital three years later, this time for the European Championship. And this time I also got to leave Sarajevo with a gold medal.
My biggest motivation for success that year, if you can believe it, was in the family: my sister-in-law, Anett Pötzsch, with four European Championship titles, and up to this time the most successful figure skater in this country, having won two World Championship titles and an Olympic victory in 1980. We had trained together under Mrs. Müller from the time I began skating. I wanted to beat her record, and that would only happen with a new title. It's crazy, but it worked.

I kept the freestyle, which had gone over so well with the spectators and the judges during the previous season, but had trained more intensively on the triple Rittberger, which I had planned for the middle of the program. In those days it wasn't unheard of to skate the same program for two years. Nowadays, it would be unimaginable. One has to have new ideas and new music every year now at the big championship games. The compulsories, during which one skates in boring circles for hours on one leg in a state of consciousness and wanting to go to sleep, still doesn't have me jumping for joy. Instead, I dream in the morning stillness of the ice rink, circling away, making up nice stories and thinking of boys. Hello, I'm old enough for that now.
But this doesn't do much to improve my loop paragraphs, or change double three. At contests, the judges sometimes have to slide on their knees to pinpoint the tracks left behind, see if the edges of the blades are clean, the tracks are covered, the triples are on the same lines, the two or three circles are round and not oval-shaped, and so on. Actually, they are considering, in the World Championships and within the ISU, whether they should discontinue the compulsories altogether.
The discussions didn't help me at this point. They still had them here. The compulsories and the tracks, which should look like they were drawn with a compass. My tracks and circles don't exactly look like textbook examples, and as a result, I am unfortunately in fourth place after the compulsories. That had not happened at the European Championships in the last five years. So the short program, which had been a bit of a headache in the last season, counted more than ever now.

That, on the other hand, was brand new, and I always skated it with an overwhelming sense of joy. It was to the Glenn Miller melody, "In the Mood", in a mini short-dress. Nobody should be able to say that I was wearing pants again. Of course, I was extremely nervous beforehand. After the compulsories, I couldn't afford even one mistake, so I turned my anxieties into energy, and skated flawlessly. After that, everyone knew that I was back in the running for a victory.
On the day of the freestyle, because of my superstitions, I warmed up on the same spot that I had three years earlier for the Olympic freestyle performance. The placing after the freestyle between Anna Kondraschowa, Kira Iwanowa, Claudia Leistner and me, will decide who will win in total.
Anna und Kira, who normally place higher than I in the compulsories, are otherwise each a basket of nerves and reveal their insecurities during the freestyle. Claudia skated a masterful freestyle, and was still in fourth place. She and some of the others felt cheated and the traditional discussion over the scoring. What is fair? What is denied? What is pushed through? Who? How? Where? When? What? I am the last to go out onto the ice, am given a warm welcome by the audience and dance my "West Side Story" with four triples. Okay, I'll admit, the triple Rittberger I had planned, who isn't one of my best friends, was omitted again for tactical purposes. After seeing that the others weren't without their mistakes, I didn't really need it. Why risk a possible mistake? It was enough that evening for the highest scores, and I was thinking, "Debi Thomas, you'd better watch out, I'm on my way..."