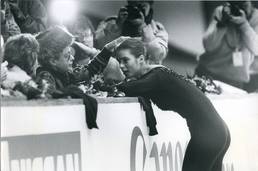 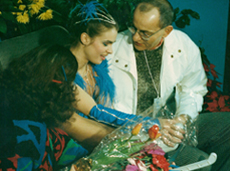 My long-time choreographer Rudi Suchy and Mrs. Müller rejoicing with me over the perfect short program "Jerry´s Girl" and the highest score of five 6.0's. What a great way to kick off the season! 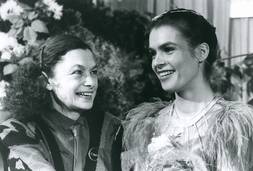 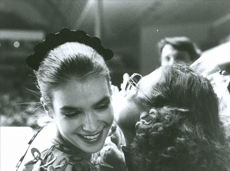 A smooch with Mrs. Müller, after everything worked out so well in the freestyle. 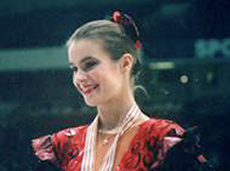 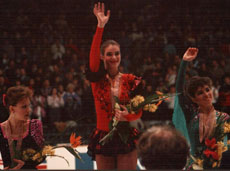 Kira Iwanowa and Anna Kondraschowa standing beside me on the podium. 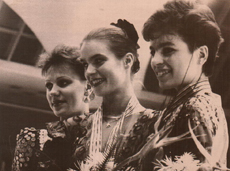 Standing together once again on the top step to greet the photographer...and the groundhog :-)

The newspaper headlines this year read as follows: The magazine Hörzu: "She Will Only Dance for One More Winter", in the following pages, "Farewell, Kati", in the magazine QUICK: "Hollywood Captivates the Ice Princess", in Funk Uhr: "Caught between Marx and Michael", NEWSWEEK: "The Battle of the Blades".
Yes, it was to be my last season as an amateur figure skater. What was to happen afterwards and what my future would bring was still written in the stars. I know as an athlete, that I still definitely want to win all the titles this year, and concluded that after I had turned my back on competitive sports, the motivation would no longer be there for the continuation of laborious training at this level, which demands an unbelievable amount of resignation for any high-performance athlete. At any rate, as a figure skater, I still want to be out on the ice, captivating my audience, and to be included in the world of legendary ice skaters. However, I am living in a country where, up to now, no figure skater has been allowed to perform in shows. For now the important thing is to win my very last European Championship title.
Everything this year is for the last time, and yet, it is also new. The sounds of the Spanish guitar had fascinated me for three years now, and for this reason, I chose "Flamenco Fantasies" for my short freestyle program. Having improvised at training to Caryn Kadavy's Spanish freestyle melodies with great success the previous year, it became perfectly clear that my passion for this music had been ignited, and my trainer, Mrs Müller, and I came up with the idea simultaneously to interpret the role of the seductive "Carmen". I take ballet lessons to acquire the proud posture of the spirited Spaniard, and frequently watch the modern film "Carmen" by Carlos Saura. I had also gotten a taste of love and of the ruthlessness of passion. I am older, more mature, and womanly enough to fill this role credibly.

We choose the Broadway melody "Jerry's Girl" for the short program. The two programs are once again rather contradictory. One is so packed with speed and vitality, that I am spinning across the ice and the other is dramatic, coquettish and passionate. I take the time to make eye contact with the audience and the judges, and, yes, flirt with them, too.

The costumes were tailored by Mrs. Eppinger from the Friedrichstadtpalast. She had already designed and sewn many of my skating costumes. She made show costumes for dancers. They are more sophisticated. They are a bit more revealing. Now here is the challenge: to manage a mix between more sport and less show. In my opinion we were very successful. Ok, a little more show is there, and this is precisely what shocked the rest of the ice skating world terribly, and some trainers reacted a little too indignantly at the feathers, the underpants, and the plunging neckline. The world is startled again, that I am a bit brighter, more colorful and not as grey as most would imagine someone from the GDR would be. Clearly, less is more, more often these days. Yet if one has too little, he occasionally takes too much. Thus, more feathers, more rhinestones, brighter colors. I really crammed for the compulsories this year. I never wanted to be so far behind again and have to start making up for it, like I did the previous year. Perhaps I have grown a little calmer with my age and enjoy the quiet training and the silence of the ice rink, where one is only startled by the sound of me sneezing. Otherwise I am tackling my disdained compulsories with physical tension, dreaming during my daily training of my life afterwards, and of the 1988 Olympics.
It paid off. I am in second place after the compulsories, behind, whom else, but Kira Iwanowa. Well, I know that a gold medal is possible. Monika Schüler wrote: "The first blow came from the 1.65m tall, 52kg girl from Karl Marx City with her dance show influenced short program "Jerry´s Girl”, with which her perfectly coordinated elements earned her five scores of 6.0 -a novelty for which, since the introduction of the women's short freestyle in 1973, a "dream score " has been given for the first time. Kira Iwanowa and Anna Kondraschowa (both from the USSR), who, likewise, each gave flawless performances before the freestyle could not hold a candle to the performance given by Katarina Witt in this category. The champion reached the climax with her completely dedicated interpretation of "Carmen", securely completing four triples and receiving two more perfect scores of 6.0.
The atmosphere was fantastic, with an audience of 10.000 people. Judges, television reporters, journalists and experts congratulated me and praised me for the new program and for my interpretation of "Carmen". All the same, I know that even though it is my best score yet at the European Championships, I have more in store. The Olympics were five weeks away. That would give me a little bit of time to train. At the conclusion, I am in first place, Kira Iwanowa in second, Anna Kondraschowa in third and Claudia Leistner in fourth.
These results seem very similar to those of the previous four years, and reminds me of the film "Groundhog Day", which had yet to be filmed.