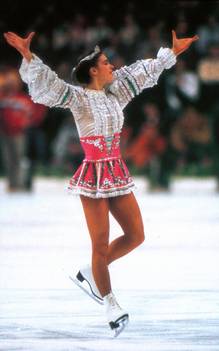 The first steps of the short freestyle. 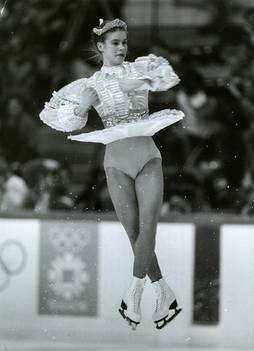 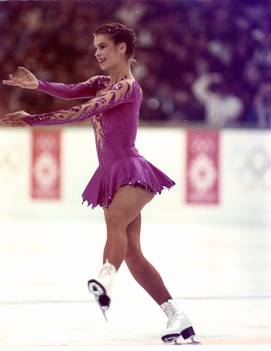 During the freestyle presentation in Sarajevo 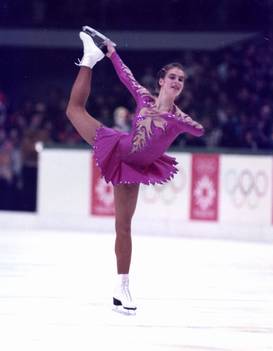 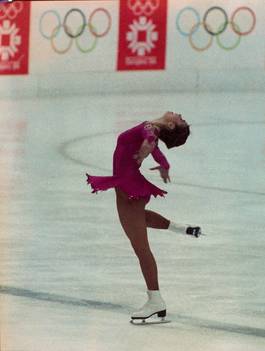 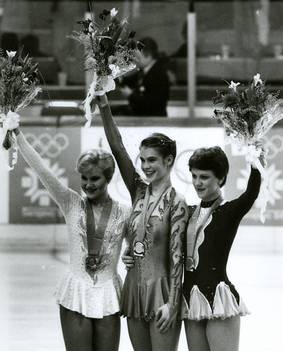 Together with Rosalynn Summers (silver) and Kira Iwanowa (Bronze) on the victory podium.

Olympic Champion in Sarajevo in 1984

At the age of 18, I participate for the first time in the Olympic Games in Sarajevo in 1984. For an athlete, being eligible for the Olympics is the greatest honor, and if you have the chance to win a medal, you have to seize the opportunity. My biggest goal is to return home with a gold medal.

The 1984 Winter Olympics were to be held in the Balkans for the first time in Olympic history. Surprisingly, the capitol of Bosnia-Herzegovina was chosen to receive the commission in 1978 over rival countries Japan and Sweden. A world Championship is one thing, but to be in the Olympic Games, living in an Olympic Village with world-class athletes from other disciplines, sharing the excitement every day with team-mates from your own country, to see that others are celebrating because they have successfully won their competition, but still having to concentrate, because your own competition hasn't begun yet - are all challenges I am not familiar with, but which would completely enrich my years of competition. Traditionally, the women's competitions are the grand finale of the Winter Olympics, which requires quite a bit of patience from us girls.
It also brings with it some unusual situations. For example, in the afternoon before my competition, the bobsled team and I were making our preparations together. They sharpened their runners, while I applied white shoe polish to my skates.

My greatest opponent at the Olympic Games in Sarajevo in 1984 is the American Figure Skater, Rosalynn Summers. The previous year, she had become the World Champion, I was only in fourth place, behind the two Russian skaters, Kira Iwanowa and Anna Kondraschowa. I laid my foundation with third place in the compulsories and went on to perform flawlessly in the short program, putting me in the lead before the freestyle. It was then a battle between me and Rosalynn during the freestyle, and we decided, for reasons of uncertainty, to omit the relatively risky triple flip. Instead, I would do a double flip in combination with a double axel, and since Rosalynn's jumping capabilities were limited to "two different triples", Mrs. Müller and I were feeling confident.

My difficult starting combination, a double Lutz-triple toe-loop went perfectly, but later, my heart stopped, as the triple Salchow only turned out to be a double. That meant that I would have to really concentrate, because I can't afford any more mistakes. The rest of the program was finished without any flaws. I am overjoyed after my performance, that everything went so well, but Rosalynn had not yet gone out on the ice. She can't stand the pressure, and makes several small mistakes. Following her performance, I am pretty certain that I have won. I wait for the score, and almost fall out of my skates, when I read that the Italian judge has given Rosalynn a 6.0 in the B category, and I think, well, I will get the silver. I walk slowly and a little disappointed down the stairs to the dressing room, when some people rush up to congratulate me with hugs. The first is Christopher Dean, who happily informs me, that I have won. The both of them, Jean Torvell and Christopher Dean, made figure skating history at the games in Sarajevo with their interpretation of “Bolero”, which earned them scores of 6.0 all across the board.

After the Olympic Games in Sarajevo, not only the figure skating circle knows my name. I had now also won hearts in the United States. One journalist reporting from Sarajevo wrote in his editorial, "I have just seen Brooke Shields on skates" and according to a sports magazine, one television reporter had sighed, "If that's the true face of socialism, then it's fine with me if America becomes socialist. But why the hell isn't she from Hollywood?" Well, we all know that America would not become socialist, but the German Democratic Republic would become democratic six years later, after the fall of the Berlin Wall in 1989. I met Brooke, who was already a big film star at that time, in the nineties in Sun Valley, my favorite place in the summer for more than a decade, and a popular holiday resort for Hollywood stars. She came up to me, gave me a hug, and said it was like meeting her sister. Of course there was also much said to her about our similarity, and at this first meeting, we laughed a lot.