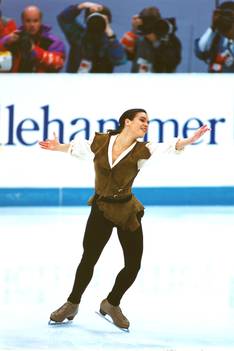 My short program was danced to the music from the blockbuster film "Robin Hood". 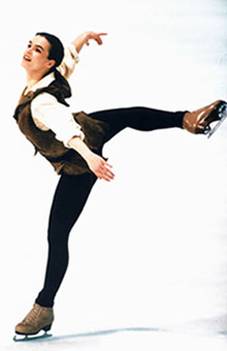 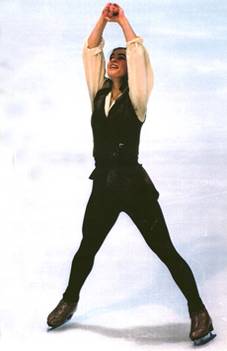 Great relief after the my flawless short program 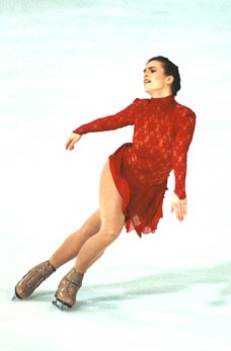 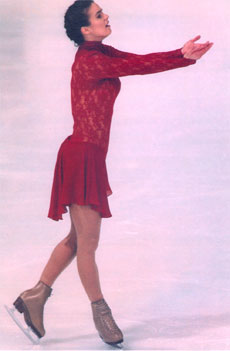 1994 was the first time after the reunification that Germany had a united team for the Winter Olympics - and I was delighted to be a part of it. In order to achieve this, 1993 was going to be a rollercoaster of a year. As soon as my "comeback" was announced at the beginning of the year, parts of the German press alleged that it was a stunt from me to get some promotion and that I would pull out shortly before the competition claiming an “injury”.

Little did they know how much I meant it! My dearest wish was to use the stage that the Olympic Games can be to remind the world, 10 years after my first gold medal in Sarajevo, that a cruel civil war had been raging there since 1992. What I found so exceptional and beautiful back in 1984 was the folkloric appeal and diversity radiating from churches, synagogues and minarets coexisting peacefully together. And at present war was destroying it all.

With these thoughts at heart, I could not find a more appropriate and suitable music than Pete Seeger's famous antiwar song "Where have all the flowers gone" for my long program. Together with Diether Dehm I called Pete Seeger personally and got his consent to use the song. Then composer and pianist Rainer Oleak wrote a new arrangement of this melody under the creative supervision of Kurt Mazur.

The anticipation of having the opportunity to show this long program in Lillehammer gave me the necessary motivation to endure once again the year-long strenuous physical preparation that such endeavour requires.

A DISAPPOINTING IN BETWEEN STAGE

On December 3rd, the day of my 28th birthday, I presented for the first time my long program at a skating exhibition in Frankfurt in front of a sold-out hall filled with over 100 accredited journalists. Unfortunately I failed utterly. I crumbled and public scorn hit me which hurt me very much. But I knew that 14 days later during the German Championship I would redeem myself. There I made a strong impression and my third Olympic Games were a possibility again.

After 1988 the popularity of amateur figure skating had weakened. The professional sport was in contrast booming especially in the United States thanks to skaters like us. Therefore the ISU decided to change the rules for skaters and gave the professionals the opportunity to become amateurs once again in order to take part in the Games.

Prior to the beginning of the Games, the women competition was unexpectedly and somehow unwantedly thrown into the spotlight. Despite the fact that in January 1994 after a practice session at the U.S. Figure Skating Championships Nancy Kerrigan was clubbed in the right knee with a police baton by a hitman hired by the ex-husband of skating rival Tonya Harding, both skaters took part in the Olympics. Both of them trained together on the ice and everyday the ice rink was filled with tons of journalists who scrutinised the ice to see if their paths would "cross" again. It remained peaceful. The young 15 and 16 year-old Oksana Baiul and Tanja Szewczenko were in my training group. At one time they where crashing into each other so hard that both of them were lying on the ice with their shins bleeding. When I helped both of them get back on their feet I, for a moment, felt with my age of 28 years like an "Ice Mummy".

My short program went perfectly. Although getting deductions for my Robin Hood costume - I once again skated in pants - I came in 6th place and thus was qualified to skate my long program in the last and best group. By the way, Bryan Adams' ballad version of the theme tune of the Robin Hood movie is a worldwide hit.

Before the start of my long program I rested my hands on the rink fence, as I always used to do in the past. Mrs. Müller stood confidently by my side, her hands resting on mine and we were looking each other deeply and reassuringly into the eyes until she released me to skate toward the center of the ice. I heard the inimitable whistle that only my dad could make and I knew that my loved ones were here for me. It’s the first time that my parents, my family and some of my closest and most trusted friends were allowed to attend the Olympic Games to share with me this upmost emotional moment in my sports career. There were also countless celebrities in the stands, among them the IOC President Juan-Antonio Samaranch, Chuck Norris, and even General Schwarzkopf.

For the long program I had drawn a start position that I used to always particularly love: Last group, last skater, the greatest possible pressure with no way out. When I voiced a silent "I am so sorry” to the audience after my program, I apologised for a long program that was not quite perfect. The jumps that I had planned were not as great as expected that evening.

Since 1988 I had not participated in any significant competition and for the first time in my career I was not capable of withstanding the pressure that comes with it. But there is a positive side to the story. Many of the spectators did not understand why I had apologised. They had immediately forgotten in which rank I ended up and only remembered my personal mission about Sarajevo. Looking back, I had achieved exactly what I had trained so hard for all year. Moreover Lillehammer kept its promise of being a true Olympic Winter's Tale with all its snow splendour.

The overwhelming sympathy that people granted me, particularly in all of Germany, made me realise that with participating in the 3rd Olympic Games in 1994 I had finally arrived in the unified Germany.

Two weeks after the Games, I enter the ice of a sold out “Madison Square Garden” in New York, gliding in the darkness to perform "Where have all the flowers gone”. When the audience recognised both my silhouette and my blood-red high-necked lace dress they started applauding and gave me "standing ovations" before I had even started.

RETURNING TO SARAJEVO IN 2015
Sarajevo was marked by three significant historical events: the assassination of Archduke Ferdinand in 1914 which contributed to the outbreak of World War One, the 1984 Olympic Winter Games which the cosmopolitan and cordial people of this city hosted and organised brilliantly and the harrowing civil war between 1992 and 1995. In the fall of 2015 I returned to Sarajevo for the shooting of the ARD documentary “Katarina Witt - A Journey to myself” and even now, walking through the city, I noticed the terrible scars that war had left on almost every corner. There are ruins, facades damaged by bullet holes and hardly patched up as well as red roses in the streets recalling the shell impacts. But I also saw a colourful city full of young and optimistic people. I was deeply touched that so many still recognised me. They were grateful that I had never forgotten the city and their people and they will always have a special place in my heart.
Copyright Katarina Witt
Sitemap | Datenschutz | About