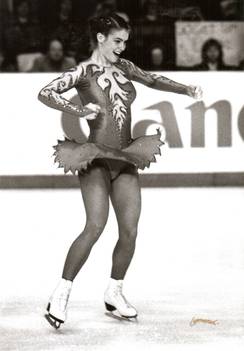 Exuberance during the final pirouette. The freestyle went very well. 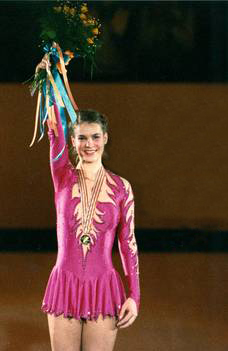 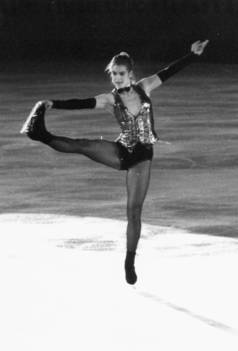 Skating shows--finally a chance to show the fun stuff, no rules, no points, just for the audience.

An Olympic year and World Championship season is especially exciting for a figure skater, and it demands a great deal of endurance. In some sport disciplines, there is no World Championship during an Olympic year. The first competitions for us begin in September, and the last and most important is in March: The World Championship. Because the Olympic Games are the high point of the season, many winter athletes can celebrate accordingly afterwards, but we figure skaters, on the other hand, can't let ourselves be distracted. We still have to train further. So I have to admit, I'm a little bit out of steam, and I don't think I'm the only one.
Nevertheless, my goal and incentive for Ottawa is to become the World Champion for the first time, and, in fact, 1984 would be a fantastic year for me.

While at the European Championships, I had steadily been moving up the steps of the victory podium, I was still dissatisfied with my placing at the World Championships, which had so far been 10th, 5th, 2nd and 4th. Although, in retrospect, being in fourth place the previous year had really opened my eyes to the fact that during an athletic career, there have to also be losses, in order to suffer the consequences. And maybe that "beating" was just the thing I needed to make it through the Olympic year with seriousness and discipline. In any case, I enjoyed going to the World Championships in Ottawa as a brand new Olympic gold medallist and now the favourite starting off.
Luckily, I actually managed to pull a Hattrick, winning all three major titles in one season, and for the first time, I was also able to receive a gold medal for each of the 3 categories, the dreaded compulsories (Oh man, the endless, boring hours of compulsory training this year actually paid off), the short program, and the freestyle. However, it would be for the last time.
A Japanese skater, Midori Ito, already showed promise in Ottawa of becoming a strong future competitor. The height and breadth of her various triple jumps have yet to be matched. But in March, I'm not going to worry my head about that yet. Instead, I'm going to enjoy the success, and afterwards go on the ISU figure skating tour through the United States to be adored by the public. Skating exhibitions are a loooot more fun, anyway!