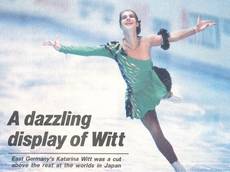 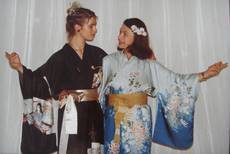 My trainer, Mrs. Müller and I cause a commotion at the closing banquet with the traditional kimono. 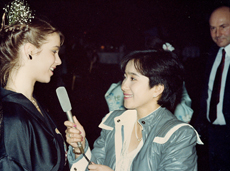 In an interview with Emi Watanabe - grinning in the background, our figure skating manager, Jochen Grünwald

As a rule, it is easier to win the title for the first time, than it is to keep and defend it. This is more difficult, because the pressure is greater, and the rivals are of course, hungry for it too.But I have a strong advantage: Pressure spurs me on rather than holding me back. After an Olympic year, many stars quit to become professionals, so that they can renounce the stress of competition by going on tour and skating in shows, and yes, back then, finally earning some real money. Thus, my biggest rival in past years, Rosalynn Sumners, quit to go professional. Many years later, we would become good friends and tour together all over the world, and one day I would have her playing the role of my evil stepsister in a production of the fairy tale, "The Ice Princess", not to mention many other show productions which I would organize myself. But we know nothing of this development yet.

Instead, the American figure skater Debi Thomas entered the scene at the World Championships in Tokyo. From the Olympic Games the previous year until 1988, she would be my biggest opponent. In the years to come, we will fight the most exciting duels and not give an inch.

So Many Stuffed Animals

The preceding European Championships had opened my eyes once again, in that the title is hotly contested by the other skaters, and that it isn't a given, that another competitor won't take it away. I had actually had a stroke of luck in winning the European Championship, but one cannot always rely on that happening. Therefore, I use the time between championships, and ascertain that when I constantly focus, I can achieve an unbelievable amount in a very short time. Luckily I have a lot of fans in Japan, because I often participate in the NHK Trophy, a generally coveted preliminary competition, for the season. After the compulsories, I am in third place, with which I am extremely satisfied. This category is the Soviet skater, Kira Iwanowa´s, greatest strength, and she always receives high scores, which I could only dream of. But I know that my strength is in the freestyle categories. Over the years, I found Kira to be a wonderful figure skater, and was often astounded by her performances during training. But in the course of the years, I learn that she is not a confident skater, and, unfortunately, she rarely shows her amazing potential in competition. Tiffany Chin, from the USA, is in second place, but I am not too worried about that. My short program couldn't be better. Afterwards, I would tell the American press, "In my Hungarian program last year, I had to constantly smile. This year there's no smile. It was so difficult for me. Such a serious program." Well, to be fiery and Spanish, you can only have a sparkle in your eye. Even if I am overjoyed at each successful element, I can't show it here. This was probably the beginning of my acting career. I win this category and am still in third place overall and still don't worry too much about it. Now I simply have to win the freestyle. I always assess, that I would rather not be the first to skate during the freestyle, because it makes you feel too secure. I much prefer to "bring up the rear".The freestyle goes extremely well, and is flawless. I do four triple jumps. At that point, it was the best freestyle in my skating life. In any case, I am grinning subsequently to the scoring at the "Kiss and Cry" corner with Mrs. Müller over the contest and winning my first World Championship Title. Yippee!Debi Thomas, the first black female skater to participate in a World Championship, was in fifth place at her debut in Tokyo, and was already showing strength in her jumps. I not only take home a gold medal, but also a wonderful Kimono, memories of a bewildering spotted ice cream, and innumerable cute and funny stuffed animals, which the Japanese threw in multitudes onto the ice. I saved a few of them and enjoy thinking back to this extraordinary land and this memorable time.