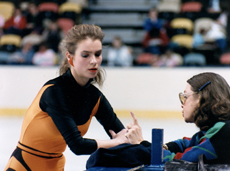 Enjoying training in front of 5,000 spectators. With these bright colors on my body, eyelids and ears, I'd be hard to miss! In my own defence, it was back in the 80's! 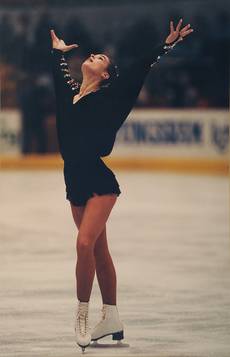 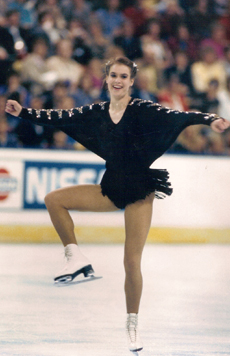 ...Overjoyed and relieved, I do my final pirouette as Maria 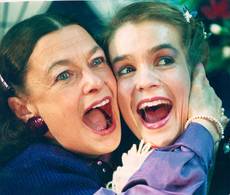 Mrs. Müller and I rejoicing over another 6.0 and the fact that "Ay von may teitl beck".

The duel with the American Debi Thomas, which had begun the previous year in Geneva, as Debi was crowned World Champion, was to continue in America, her homeland. I did not want to lose a second time, so I went to Cincinnati in1987 to the World Championships to win back my title.

"I came to Cincinnati to win my title back"

In interviews, I am always careful with predictions when asked what my plans are. What kind of a strange question is that? Naturally, athletes travel to competitions in order to do their best and the best go there to win. But of course, one can't openly say that for fear of possibly messing up. Nonetheless, in my first television interview on NBC, this line actually slipped out of my mouth: "Ay kemm tu chintzschinettie tu vinn may teitle beck". And this with the heaviest Saxon accent. With that, I became the biggest entertainment of the week, and this comment was broadcast almost every day.

The World Championship in Cincinnati

The American fans love their figure skaters, but also appreciate the capabilities of the opponents, and behave very fairly, which motivates athletes. It is unusual in Cincinnati, that a large number of spectators come to watch the athletes train, and with about 5,000 people watching, some figure skaters get a bit nervous. I, on the other hand, hate empty seats, even when I am training. Otherwise, who should I smile at? Who can I flirt with? An empty arena? No thanks. Thus, I love these hours of training. Since the World Championships are the absolute high point of the season, I had been training meticulously towards this week, this day, these few minutes. Not in September, nor in December, nor in February, had I been so fit as I was now, in March. Here. For the World Championship. So I am enjoying my training immensely and loving the attention of the spectators. During the collective freestyle training, the music for each participant was played once, so that we could practice. Many skate through the whole program, some only partially, and some ignore the music altogether. Through the years I have noticed more and more that figure skating, for me, means more than just doing the jumps, which I am always getting better at, and what I really enjoy most is to apply my rhythmic instincts and simply improvise. Dancing, skating effortlessly, inventing new dance steps, and acting out the music has become an emotional outlet for me. So here I am taking the opportunity to improvise to new music. Caryn Kadavy had chosen Spanish music for her freestyle, and I am especially fond of it. Without thinking, I get absorbed in the music and apparently do a pretty good job. The spectators applauded like crazy, and I am glowing. But Caryn is pretty ticked-off. And rightly so! I had unconsciously taken all the attention away from her! I really never did that on purpose, although I am often accused of that. I simply phased out everything around me and let my body just go with the music, something I would have the pleasure of doing for many, many years. But right now, in March of 1987, I don't know that yet. Finally, the competitions begin, and with them, the compulsories. And with them, my first bust. Fifth place! What a shock! Pardon me, but how in the world am I supposed to win my title back? By now I am used to having to come up from behind, but from the fifth place? This seems like a hopeless case, and victory now looks like a distant dream. Kira, Debi, Claudia and Caryn are ahead of me. What kind of a strange line-up was this? The only thing to do was to briskly rush into the program and have no fear. Because if fear becomes the driving force, it guarantees failure. The short program went flawlessly. I win in this category, and move up into second place, and I know that I had a stroke of luck. If Debi had moved into second at this point, I would not be able to win on my own strength, but would instead have to hope the others would make mistakes. That would have been a thankless situation. Everyone is trying to figure out the scores, and as it turns out, five girls still have the chance to win the crown. What was to be a dual turned into a battle between five of us. There had never been a tussle like this before for the title! The last category in the ladies' competitions became a thriller. Every one, and I mean every one, skated better than the one before. Liz Manley gave a super performance, then Caryn Kavady did a one-up on her, and skated so well, she could hardly believe it herself. Debi Thomas skated right before me. I am backstage the whole time and hear the audience applauding like crazy and going berserk, and it is a wall of sound coming from 15,000 spectators; something I have never experienced before in my life.

I catch the last few seconds of Debi's freestyle, can hardly hear my own thoughts, and I know that despite her ankle injury, she has just skated for her life and has conjured up a brilliant freestyle. The fans are completely beside themselves. And I am a little paler in the face.
I skate a little to warm up, and wonder why Debi's score had not been posted yet. I skate over to the band to ask about it, and find out that it was a commercial break. Imagine that! I am thinking, "Are they totally nuts?" Of course, I didn't know a thing about live television and the importance of advertising. I am anxious to start, and look like a feisty colt who is being held back. Finally, I am presented and must go out into this cauldron of sound. The audience gives me a warm welcome, and it gives me a lot of strength. Besides that, I notice out of the corner of my eye, that Debi is situated directly at rink-side, in order to watch me. Somehow that seems familiar! This gives me the boost I need, and I think, "the time is right".
I take one more deep breath, try to relax and bolster myself up. The first triple combination went without batting an eye, the triple Salchow was also good to me, the double axel remembered, too, that it was part of the program, and now came the clincher. I know, that without a triple Rittberger, I won't even be going home with a flower pot. The choreography allows me to get a glimpse of Mrs. Müller, who subtly gives me an encouraging nod, and I can do nothing at this point but take the risk. I dash into the run-up, make my approach, jump, and carry it through. Yippee! The subsequent triple Salchow combination also knows where it belongs, and on the landing of the fifth and last triple, I can hardly keep my mouth closed for joy. During the steps that followed, I spontaneously start singing the text, "I want to be in America".
At the end, I was almost in a trance, and feel like I am flying through the program and the spectators are carrying me to the last double axel. Everything turns out right. It was to be the most technically difficult and most worthwhile freestyle performance in my entire career.
To present and play the role of Maria, from the popular American music archives in the USA here in Cincinnati was unprecedented for me, and I hope that Dick Button, who had made the comment, "An East German dances an American Maria like an American dances a Russian Kasachok," will take it back at some point. After my freestyle, the audience gives me a standing ovation, and I wish I could hug each and every one of them. But Mrs. Müller and I almost crushed each other in our exuberance at the "Kiss and Cry". Then I get another 6.0 in the B category and can't believe it all. One has to give credit to the figure skating fans, but also to the American spectators. They always support their own skaters, but at the same time, they are also fair to his or her opponent, and always appreciate their performance. This is the only way an athlete really has a chance! Luckily, I could make good on my badly pronounced verbal "threat" and get "mai teitl beck." The duel with Debi is to be continued...