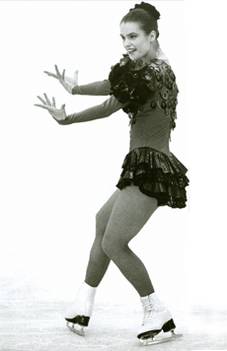 At my last World Championship, once again as "Carmen"... 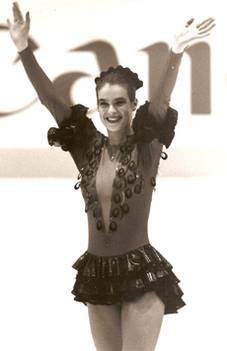 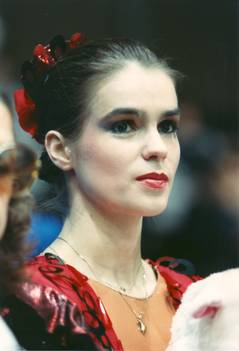 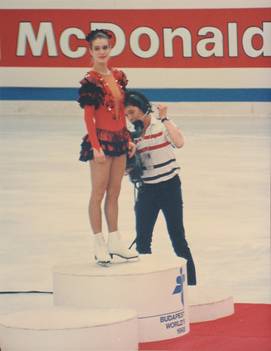 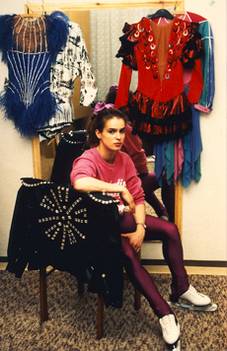 ...and Goodbye to all my amateur costumes!

The World Championships in Budapest would be my last championship as an amateur figure skater. I am now 22. Actually pretty young, but, then again in figure skating it's pretty old. I have 15 years of competitions behind me, and I know that I have reached my limit in competitive sports. Besides just the stress of competing, emotionally, this World Championship will take everything I've got. My heart has always been in figure skating. I always had a competitive nature, liked the pressure, and like to measure myself against my opponents. And, of course, I loved to win. Nevertheless, after two Olympic victories, six European Championship titles, and four World Championship titles, there's nothing more for me to win. There's simply nothing higher.

The Compulsory Skates on the Hook

I am actually happy to know that this will be the very, very, very last competition in my life! I have just won the Olympics for the second time and hardly got to celebrate it for a minute, because I had to get back to the agenda and keep myself fit for the next World Championship. Clearly, as an athlete, one knows that today's victory doesn't count tomorrow. New competition, new chance. And I know Debi and Liz also want to stay at the top! It is also their farewell. Now this will be exciting.

Ever since the Olympics, the sports press and the figure skating world have been asking if they will see me on the ice again.
The "yellow press" is asking themselves which advertising campaigns I will accept, or whether I've decided between "Dallas" and "Denver".
I am asking myself, how I could still fulfil my dreams on the ice without having to receive a score?
I was fearful of becoming a figure skater without ice.
Like a painter without a canvas, a singer with no voice, or an actress without a stage, or, or, or...
If I had known then, that 20 wonderful and fulfilling years on the ice were still to come, I would have breathed a lot easier!
At any rate, I am not the least bit sad about finally hanging up my compulsory skates after the competition, both literally and figuratively. I won't be shedding any tears over the compulsories, although I have especially dedicated myself to them in the last few years. I could glean the results of that this season, and was even ahead of Elizabeth Manley and Debi Thomas, in first place. Kira, the absolute queen of the compulsories, left the "battlefield" to the rest us girls. She wasn't there at all.
Logically, I take the skates off the hook and bring them home with me, since they belong to the club, and another skater will be wearing them. Anyway, they're still nice and white, and maybe they will bring another skater more luck!
The short program could not be better. Every element is clean as a whistle, and once again, I am high-spirited, and right in my element with "Jerry's Girl". The audience doesn't stop clapping, and I get a score of 6.0 from the judge, Reinhard Mirmsecker, in the B category. A very fortunate farewell to my short program career. Debi is also flawless again, and receives higher scores overall, giving herself the best birthday present on that day: winning in this category. Liz botches up her combinations, and with that, it is as usual, exciting to the end.
On the day of the freestyle programs, it is especially hard for me to concentrate. The whole day, I have been listening to the song "I had the time of my life", from the film Dirty Dancing.
And it keeps going around in my head: this will be the last time. One last "Carmen", the last time to tie my skates for a competition. The last six minutes of skating. Everything seems to be for the last time on this day. Perhaps it was this melancholy and sadness that made my legs feel so heavy on this evening, and my usual attitude was gone. However, it is as if all the favourites have been jinxed, and none of them made a breathtaking presentation. The season is long, the thrill is gone.
My performance during the freestyle was not as masterful as I had wanted it to be for my last time. With only three triples and one double axel, I still made a few mistakes, and the mutual gratification with Mrs. Müller was limited, as we sat together in the "Kiss & Cry". The scores for my freestyle program were very favourable, considering the performance. It was written all over my face, how astounded I was. When you know, yourself, that it hasn't gone well, and the judge has plenty of reasons to punish you, but instead gives you a good score, you don't really feel right about it.
I have collected a lot of sympathy points from the judges in the last few years. It might be because I have always set new challenges for myself, or maybe because I always prove in competitive situations, that I can go beyond my potential, and they are amazed at that. Or maybe it's because I was always cheerful, open and friendly. That is part of the sport. Not everything can be measured in points and fractions.
A large part of figure skating is emotion! You can sometimes get carried away with your emotions for a moment. And emotions can't be rated or judged. But doesn't this sport live on it?

Perhaps the freestyle scores at this World Championship in Budapest were a little parting gift for me. But that is figure skating, too!
Thus, the three of us stood on the victory podium. Not all that happy at first, but relieved that it is finally over. As we extended our hands to each other, Liz used the opportunity to congratulate Debi on her marriage. I think, "Hey, what have you been missing out on?", and then I ask, "What wedding? When?" And Debi said, "Yeah, I got married pretty quickly, after Calgary and before the World Championship." I can't believe it. I train like crazy, and she just gets married. So there we are on the podium, receiving our medals, flowers, congratulations and the usual kisses on the cheek, and all the while we are in discussion and rather amused. And everyone around must have wondered, what in the world are those girls talking about up there on the podium?

The End of the Amateur Career

Despite all the nostalgic feelings, I am happy that my parents are in Budapest, and are able to feel the general hospitality of Hungary. They receive an accreditation from the organizers, and even tickets to the closing banquet, which irritated some of those on our team. Where did they get them, then? Not everything goes without saying. We live in the GDR, and my parents have witnessed the major part of my successful career from their living room. If I was in a "non-socialist" foreign country, they were not allowed to accompany me. Therefore, I am all the more grateful, that they are here by my side in Budapest. On behalf of all the participants, I give the acceptance speech, and my parents were there to share my tears and my words of farewell,
“I Had The Time Of My Life!”