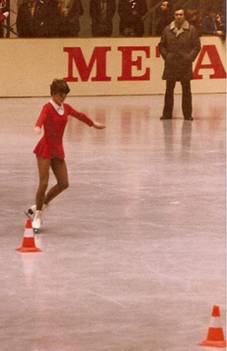 Here at the dreaded compulsory section, before the eyes of the "strict" judges.

My First World Championship in Dortmund 1980

In the year 1980 I had, at the age of fourteen, my first big performance at the Worl Championships in Dortmund, at which the best amateur figure skaters in the world participated.

The World Championships in Dortmund

In Dortmund, I finish in the tenth place, and proved at fourteen, that I had good nerves. Brisk, cheerful, and inexperienced, I captured the attention of a worldwide audience, and left them with a lasting impression. Just as it was the previous month at the European Championships in Göteborg, it is also clear to me in Dortmund, that I want to be at the top of the victory podium someday.
After all, having been in 20th place following the compulsories, and then skating a flawless short freestyle, and subsequent freestyle, during which I completed four triple jumps, and, for that time, a very difficult combination double Lutz-triple toe-loop, I worked my way up to tenth place. I am overjoyed at my World Championship debut, and know already, it would just take patience...
And it would take years before I began to enjoy the compulsories.