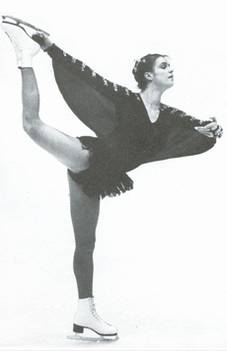 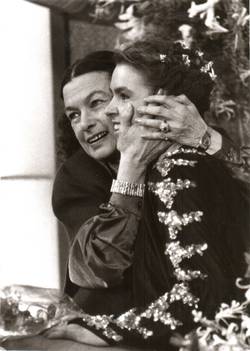 Mrs. Müller and I, jubilant despite losing the World Championship title, over my successful "Maria" from West Side Story, and for my first two perfect scores of 6.0.

My trainer Mrs. Müller, my choreographer Rudi Suchy, and I myself, with increasing experience, maturity and my ever increasing love for performing on the ice, all paid a lot of attention to the choice of music and the appropriate choreography.
In the short program, I had always tried to tie my themes together. Now, for the first time, I had dedicated myself to a continuous theme and character in my free-style. This season, I would play "Maria", from the famous musical, "West Side Story".
The music has to be fun for a figure skater, and never get boring. Because one practices daily, and therefore hears the music constantly, it can get "stuck in your headâ€ and that can really cause a problem. For us, it was always just as important for the dress to work with the music and support the character. For the first time, I tried on a costume for the National Championships, and we noticed, that it fit in with the program, but didn't fit me. The proportions were all wrong, and I looked unsophisticated. We swiftly decided to throw into the rag pile and come up with something else in a hurry.
We remembered not only the spectacular and unforgettable performance of "Bolero" by Torvill/Dean at the Olympic Games in Sarajevo, but also the unusual costumes. Presto! That was exactly the idea that we "borrowed" for my "Maria", in black with silver sequins, a short, fringed skirt, and bat-wing sleeves. Oh, I felt pretty as a poodle in that dress. It fit me and my "West Side Story" program perfectly. Everybody found it really remarkable and unique.

The freestyle program keeps me happy the whole year, and brings me success. Besides that, I notice my own further development on the ice. The World Championships started out as usual. Following the compulsories, I am in third place, which I considered a good starting point for myself. Kira Iwanowa was, as always, in first place, with a much improved Debi Thomas in second. Ooh lala! She had finished in fifth place at the last World Championships, but how did she get so far ahead in the compulsories this year? I hadn't expected that.
Anyway, everything is still wide open and possible. In the short program I botched up my jump combination, just as I had at the European Championships the previous month. I don't believe it- the thing I do best is starting to give me trouble. I hope I don't start developing a phobia because of it. I left the ice rink with a crying face, fall to fourth place, and know immediately that gold is out the window for me.
However the gold is within Debi's reach, and for the rest, we are now battling with the other girls. And if I want to have a medal at all, I can't afford to let my head hang low. Instead, I have to fight and try to skate the freestyle of my life. The competition is unbelievably high, and on this decisive and exciting evening, there are some excellent freestyle performances.

Midori Ito from Japan, just 16, skated a dynamic freestyle, punctuated with 6 triple jumps, five varied, among them a triple Lutz and a triple-triple combination. Elisabeth Manley from Canada captivated the audience with an exhilarating and flawless freestyle program with tremendous jumps. Among them was also a triple Lutz , and the height she achieved is something some figure skaters only dream of-- I do, in any case. I actually manage to clear my head, no longer kicking myself over my mistake and focus instead on my strengths. It also helped to slip into my role as "Maria" and blend out the rest of the world, but most of all, I enjoy the music and the choreography. I notice that in critical situations, I concentrate especially hard.
I turned out to be my most beautiful and soulful freestyle yet, with four triple jumps, Salchow and toe-loop. I was rewarded in the creative category with two perfect scores of 6.0, which, in the course of my international skating career, I had never received. Since I skated before Debi, I watched her program from the band. I think nothing of it, except that it would be silly to be on site and have to watch it on a monitor. Again and again, I read comments in the newspaper and on You Tube that I wanted to distract my opponent. Nonsense! I wasn't that strategic. Debi Thomas jumped four triples, Salchow and toe-loop, left the Rittberger out for tactical purposes, and won the well-deserved World Championship crown, as she was the best-rounded in all three categories, compulsory, short program and freestyle.
She is the first black World Champion in figure skating, and sums it up with the sentence "Say it loud, I'm black and I'm proud", which was quoted in all the newspapers. Roland Zorn wrote in the FAZ, "Time to reign. Wallflowers have become the Majesties of Figure Skating. The mightiest and most magnificent of women. The unshakable Ice Queen of the past years, Katarina Witt from the GDR, has been dethroned by the black American Debi Thomas. But was she really?"
The popular and thankless comment, "You didn't win the silver, you lost the gold", could actually be applied here. But with such a good freestyle, I think there is a little gold dust on the top.
After this World Championship, I realize that I can't end my amateur career yet. My goal now is most definitely to go to the Olympic Games in Calgary in 1988. But in the meantime there would be the World Championship next year, and Debi will be the hunted. And I'll be there.