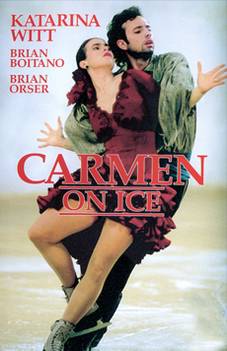 "Carmen on Ice" - The Movie

Due to my success story during the 1988 Olympic Games with "Carmen" and the passionate connection I felt with the character Carmen and the Spanish music, I developed the crazy notion that an ice film recounting the entire opera should be made. Through a lucky happenstance, I came into contact with another "crazy" person on New Year's Eve, 1989.Thomas Burger was immediately excited about the idea, and convinced Bernd Eichinger to make the film. I convinced those responsible in the GDR at the time and actually got the green light to do this unforgettable ice-opera-TV- Film production. In 1990, shortly after the wall fell, the film made its premier in the cinema and on the TV channel HBO in America, then later on the German station ARD. It was filmed on original sites in Seville. Ice was applied to the streets, and a "gypsy camp" of sand was iced over as well. The Spaniards thought we'd lost our minds. Nothing like this had ever been done before in the history of figure skating.Both former World Championship competitors and the best male figure skaters of their time, Brian Boitano and Brian Orser were an absolute casting dream in the roles of Sergeant "Don José" and the torero "Escamillo". I played the role of the seductive gypsy, "Carmen", and enjoyed every second of it.Sandra Bezic, the successful choreographer, worked together with Michael Siebert to create some amazing choreography, while the director, Horanth H. Hohlfeld, captured everything in this unusual and one-of-a-kind stage setting, on film.The filming was one of my favourite experiences during my career as a figure skater. It was an adventure, a dream that came true. However, it was also the most stressful and the hardest physical challenge I have ever undertaken. Normally, I would practice for months on the choreography for a four minute competition. Here, the choreography was created overnight, and respectively, in some cases, directly on the set, although it appears as if we had practiced for months on end. Anyway, to be able to play the role of Carmen in the entire opera, and to represent her playful, fiery, coquettish temperament and also her affectionate and tragic sides through dance and choreography, was the most valuable gift as a figure skater.All three of us were honoured in the United States of America in 1990 at the 42nd Annual Emmy Award Presentations, with an "Emmy" for extraordinary achievement in the category 'Outstanding Performance in Classical Music/Dance Programming'.