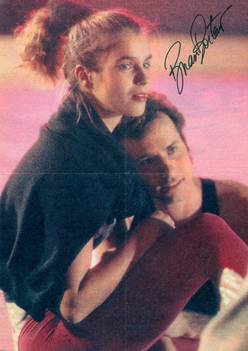 Figure skating, to me, isn't simply a competitive sport, but rather an embodiment of the world of art and of dreams. A world in which one can tell stories through dance, choreography and music. Women's freestyle figure skating requires supreme discipline. As Debi Thomas and I each coincidentally performed a dance interpretation of "Carmen", the finals in Calgary in 1988 were an absolute highlight and had the highest viewer levels.
Additionally, the duel between the two Brians from the US and Canada helped enormously to increase the popularity of the sport of figure skating and give it more esteem at the end of the 1980's.
This opened up doors of opportunity for us figure skaters, to take part in unique and extraordinary TV productions, such as "Carmen on Ice" and "The Ice Princess".

One unique production is Brian Boitano's TV Special “Canvas on Ice” for the American channel ABC in 1988. Brian skates and even freezes in Alaska on the broad plane of endless ice. I make my case in the former GDR, so that an entire American television team could enter the country and have permission to film. A sort of romantic story was told, partially in a music-video format, which was completely new for that time. I met the very innovative choreographer Sandra Bezic at that time, and learned from her the art of modern choreography. Officiating as director was Doug Wilson, who had been responsible for the world view of figure skating championships during the Olympic games in Calgary. While working on this production, I became familiar with his work, and came to treasure it. In years to follow, I would have him working on my own productions, such as “Divas on Ice”, but then, we were still in the GDR. In 1992, Brian Orser invited me to perform in his figure skating special "Night Moves", which was produced for Canadian television. I became his "Lady in Red", and remain his "Night Fantasy".