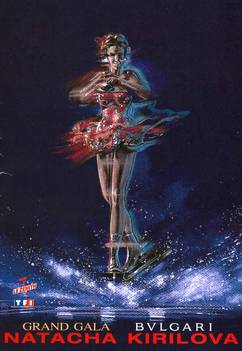 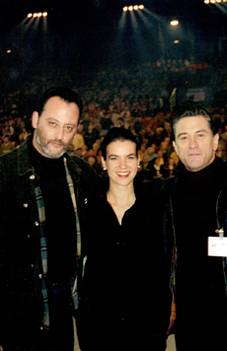 During the filming along with Jean Reno and Robert De Niro.

In 1996 I received an offer to enter the great world of Hollywood films with a tiny cameo appearance, and in 1998 the chance of a lifetime to breathe the same air as the greatest actors and actresses of our time. I have to smile in retrospect at the first one and put it down as the tiniest film episode in my life, but as for the second one, I am very grateful to have had the opportunity and the experience.

I had a guest appearance alongside Tom Cruise in the film "Jerry Maguire" from the director Cameron Crowe. The film became one of the best romantic comedies inthe 1990's, and a big success at the box office. Tom Cruise was up for an Oscar for his role, which, incidentally, was won by Cuba Gooding Jr., and it was a big breakthrough for Renee Zellweger. The story dealt with the world of sports and sport management, and combined humorous entertainment with depth and romance.
At the very end, I am standing with the American football star Troy Aikman, and have exactly two sentences of dialogue, or more precisely, four words: "Congratulations, Jerry. Great job." If you blinked you might miss me. The poster with the many photos of me having a long telephone call with Jerry is more enduring than the role itself. Hmm. At least it was sent to Hollywood by my managers in Frankfurt.

In the fast, furious, and highly acclaimed action film "Ronin", by John Frankenheimer from 1998, I play alongside Robert De Niro, Jean Reno and Natacha McElhone.
John Frankenheimer is a directing icon and a self-confessed ice skating enthusiast. As far as the realization of the film goes, I am, in fact, perfect for the role. Unfortunately, as it happened, the tour "Stars on Ice" in the USA coincided with the filming, and he took the character out of the film entirely. Luckily, the filming was put off, and I am able to go to Paris after the tour. John has the screenplay re-written, and I am put in the role of Natasha. With a great cast, "Ronin" tells the age-old story of friendship, intrigue, honor and murder. I play the role that I do best in "Ronin", a figure skater. Natacha Kirilova a Russian show star, who, at the end of the film, while during her performance to Rachmaninov's “Paganini” .....oh my, um, see it for yourself.