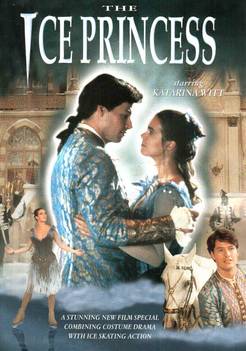 The Fairy Tale "The Ice Princess”

The success of the film "Carmen" made it possible for me to make another ice film. Thus, the fairytale "The Ice Princess" came into being in the summer of 1995 for ARD and HBO. This time it wasn't purely a figure skating film with music, choreography and facial expressions, but rather a combination of acting and figure skating. It is a modern interpretation of the classic fairy tale "Cinderella". I played the role of "Ella".
It was filmed in the Babelsberg studios, in the famous Marlene Dietrich Hall, and for some scenes we used the great, lavish set which was built for the movie "Catherine the Great" with Catharine Zeta-Jones.
The costumes could not have been richer in colour, and the temperature inside the film studio was enough to make us melt, as we were filming in the middle of summer on the ice. The combination of acting and figure skating was rather unusual.
The actors were wonderful: Vernon Dobtcheff, Hans Peter Minetti, Christopher Barker, Daniela Lunkewitz and Ivan Desny.
We got Toller Cranston, the most eccentric figure skater of all time, involved in the show, and what was especially amusing to me was that my one-time competitor, the American, Rosalyn Sumners, played my evil step-sister. She loved the part, and we had a great time together. The choreography of the ice dances was conceptualised by Michael Siebert, Diana Goolsby and I. Danny Houston, son of the famous director John Houston, was the film director. It was an extraordinary combination from all sides.
The fairytale, "THE ICE PRINCESS", was likewise nominated for an Emmy Award in the USA.