Katarina Witt on the Theater Stage 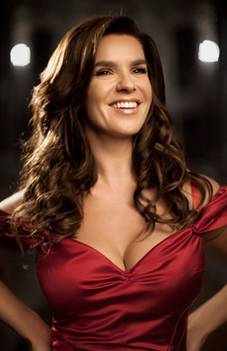 Katarina Witt on the Theater Stage

After gathering a little experience in the area of film and television, I go on stage for the first time in "Everyman", and face a new challenge. Logically, I am so nervous I could die, but luckily my big debut went well. Yippee!

The "Everyman" Theater Festival in Berlin, 2009

Brigitte Grothum staged Hugo von Hofmannstahl's "Everyman" the Berlin Cathedral. "Everymann" was played by Rüdiger Joswig, Robert Kreis played "Mammon", Herbert Feuerstein, "the Devil", and "Death" was portrayed by Günter Junghans. Ursula Karusseit is the "Mother", Deborah Weigert played "Good Deeds" and her mom, Brigitte Grothum, "Knowledge". I was "Amour".
In Hofmannsthal's moral allegory piece, the rich and cold-hearted "Everyman" is summoned by "Death" to take his final journey. Neither friends nor relatives, nor his possessions want to follow him. Completely desperate, he can only gain assistance through his good deeds. Accompanied by "Belief" and "Good Deeds" he is finally able to stand before God's judgement.


Katarina Witt as Beauty in "Everyman"

In the spring of 2009, as I received the request from Brigitte Grothum in my mailbox, asking if I could imagine playing the role of "Amour" in "Everyman", I thought, "Sure, why not? Great idea. But if you don't mind, I will go see it in the fall at the cathedral, and I'll decide afterwards, if I REALLY think I can do it." My manager and ever trustworthy consultant Elisabeth, said, "Come on. We will meet Mrs. Grothum personally, and you can decide after that." The three of us met in a hotel in Berlin. Brigitte Grothum immediately reminded me of my trainer, Mrs. Müller, whom I trusted unconditionally for years, and I saw the same enthusiasm, the same passion for her profession, and also the same desire to teach me something new. She understood my misgivings that I might fail, and am a bit afraid of that.
She dispelled my fears. Elisabeth is also confident that I can handle the challenge, and applies the right stroke of courage. Therefore, I put my trust in both of them and agree to do it. Why should I wait another year?
Exactly a year before, I had given my last performance as a figure skater. I would never have stood on my blades for so long, if I hadn't felt the joy and fulfilment of performing before an audience. I must admit, this longing drove me to some degree, to go on stage. I missed the audience, the adrenaline, and the months of preparation before a performance.
It was a work-intensive summer, rich in experiences. Brigitte coached me, and we had a great time together. I loved to learn, noticed how I started to fill my role, and was happy to meet the other actors and actresses and to learn from them. Eventually, I began following in the footsteps of Iris Berben and Sonja Kirchberger. I know that "Amour" is a small, but dignified role, and the casting always stirs up a huge amount of interest. I spent the summer going to concerts, theaters and comedies, watched and was thoroughly amused by Katharina Thalbach's staging of Shakespeare's "As You Like It", and engaged myself by reading books from great authors of the past. It was a summer full of art and culture. The rehearsals, the performance in the cathedral- the whole experience was totally cool. Every time, I was thinking, "Wow! What a great place to work!" The long rehearsals reminded me of my time of the never-ending training, and made me feel secure.
I approached the role of "Beauty" with levity and joy, rather than sensuality and sex appeal.
By the end, I was having so much fun with the stage performances and feeling more and more sure of myself with each passing day, and feeling so comfortable with such a big, diverse group of people, that I had to be careful not to get carried away. I managed to be brave for the dreaded premier. I invited my entire family, friends and business partner clan to the cathedral for moral support, and almost all of them who had shared in my farewell skating show at the Max Schmeling Arena were now here to hug me and wish me luck for my stage debut and cross their fingers for my new beginning. In my performance, I play a self-confident "Amour", dancing gleefully on the table, and worrying about my "Everyman". Despite my love for him, I run away from him screaming, and receive a loud applause from the audience. I got mostly good reviews in the newspapers and magazines, and was very relieved. Okay, there was a woman from the newspaper "Welt", who didn't care for me much, but you can't please everybody. Besides, instead of having a "premier", during which the actors are completely nervous, and every thing is new and no one has adjusted yet, there should be a "finiere". One is finally not so nervous and jittery. Everyone would be only half as sad that the fun is over, and they could celebrate at a real "finier party” together. "Everyman" is a wonderful experience! I casually do all kinds of nonsense, film with my i-phone backstage and go back on stage for the final curtain call, tripping over my skirt, which is much too long, let "Everyman" kiss me on the bosom in front of everyone, spoil the girls,Ursula, Brigitte and Deborah, with my dad's homemade apple cake, stare in amazement at the others, have a hopping contest with "Death", and bow at the end, as always , like a figure skater. My summer of culture ended in the fall with a great review in the culture section of the "Tagesspiegel".
Well, the trip was worth it.