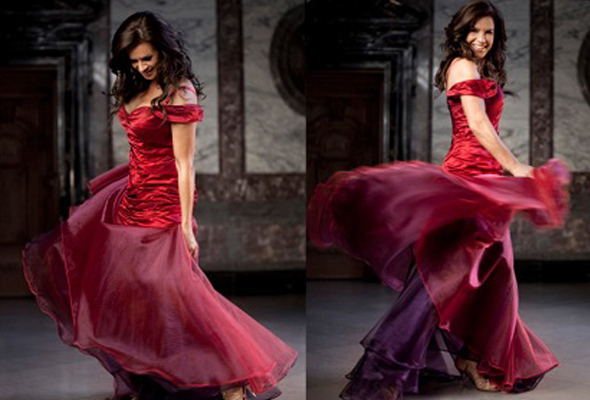 The steps she took led Katarina Witt from the ice directly to the red carpet. Today, she still enjoys a career in the spotlight of media. Over the years, she has made her mark in international films and television productions. But not only did she fancy the world of film and television- her feet were also to hit the theatre stage without her skates in 2009.

Katarina Witt is just as professional and charming in front of the camera as she is on the ice. From the beginning of her professional figure skating career, she has also contributed to many media projects, both for television and for the film industry.

For the prime time movie "The enemy in my life" for the network Sat1 in 2012 Katarina exceptionally puts on her skates again. She plays the role of a figure skater in a fictional story with a stalker. In her first main role in a movie she is embedded in a wonderful ensemble of actors, like Matthias Koeberlin, Valerie Niehaus and Martin Brambach, directed by Bernd Böhlich.

In the movie "Ronin" from 1998, she played alongside Robert De Niro as the Russian ice-skater Natasha, while she also had a small guest appearance with Tom Cruise in "Jerry Maguire" in 1996. In 1997 and 1998 Katarina Witt also made guest appearances in the American TV series "Arliss" and played alongside Pamela Anderson in "VIP" in 1999. Moreover, she has played the leading role or is invited as a star guest in the following figure skating specials and films:

For the HBO special "Carmen on Ice", she received the Emmy Award for oustanding achievement in the USA in 1990, and was likewise nominated for an Emmy Award in 1996 for her work in "The Ice Princess".

Katarina Witt and the Theatre

Katarina Witt, the most successful figure skater ever since, stood on the stage for the first time in her role as Amour in the theater production "Everyman" in Berlin. She is the top candidate of director and actress Brigitte Grothum, and is very happy to take part in this new and exciting challenge. The "Everyman" theatre festival took place from the 15th to the 25th of Octobre in the Berlin Cathedral in 2009.