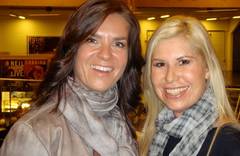 On Easter Monday I travel to Zurich accompanied by beautiful sunshine. Together with Claudia Bokel, brave comrade in our effort to bring the Winter Olympic Games 2018 to Munich, we visit the final of the Ice Hockey World Women's Championship between the USA and Canada.

The motto of this year's World Championship is: "The POWER of WOMEN" and the Swiss hosts have invited successful female athletes as guests of honor. Of course the most successful Swiss figure skater Denise Biellmann had to be there as well and I was very happy to see my dear longtime colleague again (photo). The last time we met she was a guest in my German tv show "Stars on Ice" on Pro 7. That was 2008. I can't believe how time fliesâ€¦

At overtime of the stirring final the American girls win 3 : 2. I was particularly impressed by American defense(wo)man Angela Ruggiero. Angela has won Olympic Gold in 1998, Silver 2002 and 2010 and Bronze 2006. 2010 she was elected as member of the IOC's Athletes' Commission. What an amazing career.