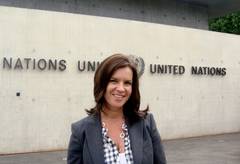 2nd INTERNATIONAL FORUM ON SPORT, PEACE AND DEVELOPMENT IN GENEVA

After yesterday's press conference I'm on my way to the airport again to attend the Forum on sport, peace and development in Geneva. Jointly organized by the International Olympic Committee (IOC) and the Office of the Special Advisor to the UN Secretary General on Sport for Development and Peace, the two day forum features sessions on how to position sport as a catalyst for achieving the UNâ€™s Millennium Development Goals, how major sport events such as the Olympic Games can deliver a legacy, and how to foster a culture of peace through sport.

On Wednesday UN Secretary General Ban Ki-Moon addresses the forum which is attended by more than 350 experts from over 100 countries. ”Sport has become a world language, a common denominator that breaks down all the walls, all the barriers,â€ says the Secretary General, ”It is a worldwide industry whose practices can have a widespread impact. Most of all, it is a powerful tool for progress and development.â€

This forum brings together various experts from the world of sport and development, including representatives from national governments, aid organizations and universities. This year's speakers include Hungarian President and IOC Member PÃ¡l Schmitt, UK Minister for Sport and the Olympic Games Hugh Robertson, Chairman of the IOCâ€™s International Relations Commission Mario Pescante, and the UN Secretary Generalâ€™s Special Advisor on Sport for Development and Peace Wilfried Lemke.