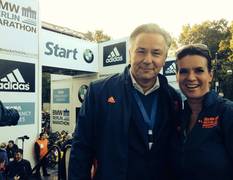 Today the 41st BMW Berlin Marathon took place and I was lucky enough to give one of the starting shots of that great sporting event together with mayor Klaus Wowereit (photo).

The Berlin marathon left many motorists cursing and whining at the numerous roads especially blocked for this event but most importantly it made the hearts of many runners and skaters beat faster. This marathon traditionally brings together the fastest runners in the world and regularly world records tumble here. Yesterday was no exception to the rule. The Kenyan Dennis Kimetto won by establishing a new world record time of 2:02:57 hours. With a glorious sunshine and a fantastic crowd of spectators, Berlin once again displayed its great sportive spirit.