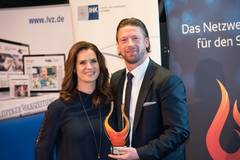 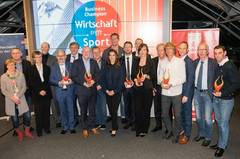 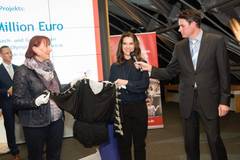 Under the motto "Economy meets sport", representatives from sports, business and politics gather regularly to campaign for the support of sports. On that occasion the "Business Champion Award" is held today at the Kuppelsaal of the Leipziger Volkszeitung. This award is given to regional entrepreneurs, athletes and associations who have made a special contribution to the sport in Leipzig. This time the honorary award is given to the highly sympathetic footballer, European Champion and Champions League winner Steffen Freund. He was very happy when I gave him a well-earned laudation as a surprise.

Photo 2: The award winners and their laudatory speakers together with Karsten Tornow from Concept4Sport, the founder of this series of events.

Photo 3: As a little surprise, I can once again examine my 1987 "Maria-Westside Story Dress", which I permanently loaned to the sport museum of Leipzig many years ago. At its sight I of course became a little sentimental.