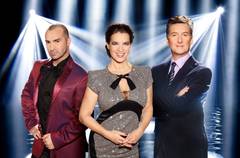 "DANCING ON ICE" ON ITV IN LONDON

Ice, Ice, Baby - finally it's time again for glamour and glory but also a lot of tears

Today is the opening night of the 7th season of "Dancing On Ice", the British version of our "Stars auf Eis" series on German television (Pro7). This is a sensational success for Jayne Torvill and Christopher Dean. They both are inspirational motivators, choreographers and also comforters for the celebrities in this show. Their "Bolero" at the Olympic Winter Games in Sarajevo is a legend. This free program was awarded with the highest score of "6.0" by all 9 judges and made history in figure skating.

Next to Robin Cousins, Olympic figure skating champion in 1980, and Louie Spence, successful dancer and choreographer, I was asked to be one of the judges for this year's season of DOI. All together there are 15 celebrities on the show. They are teamed up with professional figure skaters and compete for the "Dancing On Ice" crown. Today the first 7 pairs show their program under our critical but rather sympathetic eyes ;-) and of course the audience has a say in who will be so unfortunate to be the first to leave.

It really is an entertaining evening with the right mix of suspense, fun and tragedy. I feel very good next to Robin and Louie, even though I disagree with them at the end. And I stick to it: Andy A should have never been in the skate off! But decisions like this make figure skating thrilling and cause endless discussions among the fans ;-)