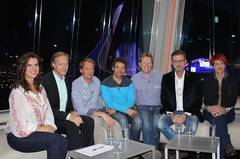 Today I bid farewell to the Black Sea in Russia and to the XXII. Olympic Winter Games in Sochi. It was certainly one of the most enjoyable games I have ever experienced. The hospitality of the Russians was both overwhelming and touching and the sport facilities were just perfect. The weather with its summery temperatures took a while to get used to but who would dare complaining about sunshine? The work with our ARD TV crew and their colleagues from the ZDF was challenging but an amazing experience.

I had countless encounters with sports enthusiasts from all around the world and dear colleagues from my active time on the ice. I caused enough commotion by expressing my opinion on the outcome of the women's competition and enjoyed equally both the creative opening ceremony and the beautifully poignant closing ceremony. I have only one regret... I would have loved bringing the sweet cuddly mascot (photo 1) back home with me :-)

photo 2: Last couch session in the ARD studio during the closing event. Here together with the hosts Gerhard Delling and Michael Antwerpes as well as with the ARD experts Markus Wasmeier, Peter Schlickenrieder, Dieter Thoma and Kati Wilhelm.