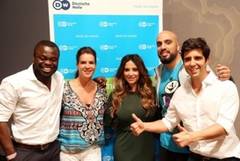 Deutsche Welle Campaign "We all are Germany" for Diversity and Tolerance

Acceptance and tolerance is a current, very serious and important subject for which I have an undivided opinion. The news about the flow of refugees streaming into Europe have of course repeatedly caught my attention and moved me deeply.

I have been supporting the campaign of the Deutsche Welle, "We are all Germany" since its inception in March 2015 and I was therefore thrilled to be joining the round table organised in the frame of the German government's annual open house weekend. In front of an attentive public, Gerald Asamoah, Enissa Amani, Abdelkarim, Deutsche Welle editor and presenter Jaafar Abdul-Karim and I discussed issues such as how to promote tolerance and diversity in Germany or what Germans can do to give refugees a new home in an upmost engaged, lively, open and entertaining atmosphere. In a nutshell we all agreed that there must be zero tolerance policy for racism!