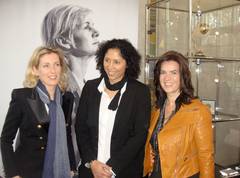 This Summer the FIFA Women's World Cup takes place in Germany. Steffi Jones (photo, middle), World Champion with the German National Football team and now head of the FIFA Women's World Cup organization committee, has already achieved what we are still fighting for. I wish her and our sports enthusiastic country that we will be able to celebrate another summer's fairytale 2011 after the one 2006, when the FIFA Men's World Cup was hosted by Germany with a tremendous success.

The motto of this year's event is: "THE BEAUTIFUL SIDE OF 20ELEVEN". And yes, it could become the year of the women!

TV star Maria Furtwängler (photo, left) is one of the 11 "First Ladies" who promote the World Cup. Spontaneously Steffi appoints me as the 12th one and before I know it I am an ambassador for the Women's World Cup as well :-)