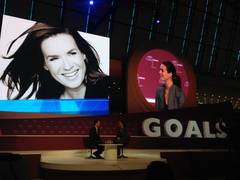 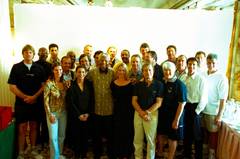 At the moment I am attending the Doha GOALS (Gathering of All Leaders in Sports). Mentors, including world class athletes such as Nadia Comaneci, Michael Johnson, Wilson Kipketer, Zico and many others, media personalities, NGO leaders, and top executives from major companies formed the Doha GOALS community, committed to making social progress through sport. Doha GOALS was founded under the high patronage of His Highness Sheikh Hamad bin Khalifa Al Thani, the Emir of Qatar. With a desire to give voice to passionate young leaders and with the conviction that no social movement is possible without active involvement from the youth, the Doha GOALS Student Ambassadors Program was created in 2012. 400 students and coordinators from high schools and universities worldwide are invited and fully supported to participate at the Forum, interact with world leaders and with some of their sporting heroes, join the Doha GOALS community and build progressive and social initiatives through sport. A great idea worth supporting!

Photo 1: In “action” together with CNN sports host Alex Thomas at the Doha GOALS 2013. The picture was taken by Bart Conner, two time gymnastics Olympic Champion

Photo 2: Nelson Mandela with members of the Laureus World Sports Academy who decide every year about the awarding of the so called “Oscar of the Sports”