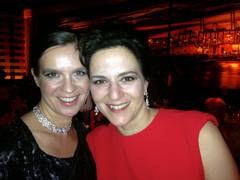 On the 27th of February 2015, the Golden Camera Award celebrated one big anniversary in Hamburg: Over the past five decades, the Golden Camera has established itself as Germany's highly prestigious film and television prize and nearly 700 Golden Cameras have been awarded to top international celebrities and national stars in the television and music industries. An honour I received in 1994 for my Olympic comeback. The award comes with a membership in the "Golden Club", the jury which reviews the films.

For the 11th time now and with his usual glee my favorite presenter Thomas Gottschalk hosted the gala which was broadcasted by the German Network ZDF. Afterwards we sat together to celebrate with friends and have a little party.

Martina Gedeck (in the photo on the right) received tonight the award for "Best German Actress". I admire her great work and achievements as a national and internationally actress and I am delighted to count her as one of my friends.