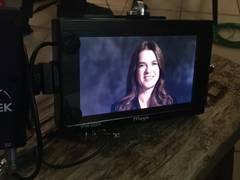 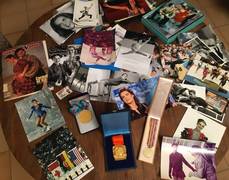 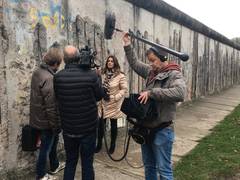 INTERVIEW FOR THE OLYMPIC CHANNEL SERIES „LEGENDS LIVE ON“

The Olympic TV channel is producing a series named "Legends Live On" portraying and honouring Olympians who continue to inspire young athletes beyond their successful career in elite sports.

For the 30-minute episode, I share some memories of my experiences and encounters of the three Olympic Games I took part in during my active career as figure skater: Sarajevo in 1984, Calgary in 1988 and Lillehammer in 1994. Of course the particular historical circumstances of that time also play a role in the series.

Who knows, maybe somewhere in the big wide world it will motivate and inspire a young girl to dedicate herself to a beautiful sport, to fulfill the great dream of taking part in the Olympic Games and to become a role model for the next generation :-)

Wouldn't that be really nice!

photo 2: my 2 gold medals from Sarajevo and Calgary and enough photos for yet another book ;-)

photo 3: every time the remnants of the Wall in Bernauer Strasse make me reflective and humble