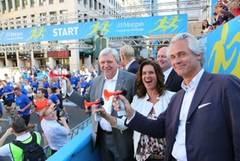 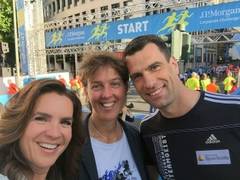 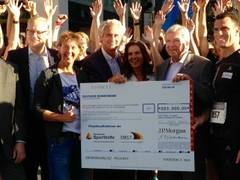 The Katarina Witt Foundation has been running successfully for the last 10 years. With the help of numerous donors we were able to support more than 180 projects worldwide.

An important event is the J.P. Morgan Corporate Challenge (JPMCC). The JPMCC is a run over a distance of 5.6 kilometers (3.5 miles) in which employees of companies of various branches can take part. It is currently the largest corporate run in the world and this year more than 70.000 runners gathered in Frankfurt. Companies from 428 German cities took part and I, for the 4th time now, had the privilege to fire the starting gun.

This year, the run was supported by prime minister of Hesse Volker Bouffier and bank director of the J.P. Morgan German Branch Martin Wiesmann (photo 1). Of course we enthusiastically cheered the runners even more so as all their efforts are for a good cause. J.P. Morgan doubles the entry fees of the participants and the total amount is traditionally donated for the promotion of sports projects for young athletes with disabilities. This year more than 253.000 Euros were raised and distributed to the German Sports Aid Foundation, the German Youth Association of Disabled Sports and also to the Katarina Witt Foundation (photo 3).

Supporting such endeavors is definitely close to my heart and thanks again at this point to all of those involved!