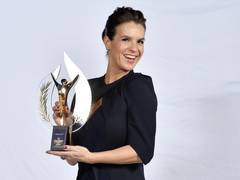 Today I am in Paris to receive the award "Les champion des champions de Légende" (the champion of champions of legends) from the largest french sports magazine L'Equipe. I am of course thrilled and honoured to be granted such a distinction, presented to me by the former french football (soccer) player and current manager of the French national team, Didier Deschamps.

I am told that this award is an acknowledgment for bringing my sport to a new dimension worldwide and becoming a winter sports icon as well as for rising above my status of olympic champion and growing into a symbol of the German and European modern history. I have to admit that I don't get compliments like this every day ;-)

All in all, the 2013 edition brings together an impressive list of prize winners: Tony Parker, François Gabart, Serena Williams, Fabien Barthez, Marion Bartoli and Rafael Nadal.