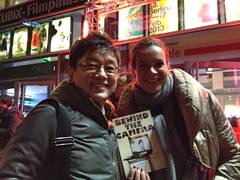 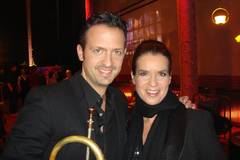 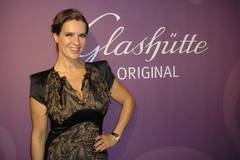 The past 10 days in Berlin have been bustling with movie fans and stars from all around the globe attending the 63rd International Berlin Film Festival. And while the 2013 edition of the Berlinale will close tomorrow with the awarding of the prestigious "Golden Bear", I thought it would be the perfect occasion for an update on my recent "excursions" :-)

On Saturday I was invited by Till Brönner to attend his performance recorded live for the "Arte Lounge" at the Radialsystem. I have been an avid fan of Till Brönner´s music for a long time and I was very much looking forward to finally have a chance to see him playing live with his band. This small but excellent concert gathering artists from different musical horizons was a particularly beautiful experience that I gladly shared with friends. By the way, Till Brönner´s latest album is a real pleasure to listen to and I highly recommend it :-)

After the concert we dropped by the "Place to Be" for a short visit. The German newspaper Bild-Zeitung held its Berlinale Party at the ever so popular scene restaurant Borchardt. For the occasion, the place was packed with German celebrities from arts, politics, economy and entertainment and all those who were lucky enough to get an invitation :-)

Apart from a major film festival, the Berlinale is also a great opportunity for major companies to present themselves. On Monday I was invited to the presentation of the latest collection of the traditional watch maker "Glashütte". The new and exclusive collection is meant to be an homage to modern and self confident women. "Celebrating Women" is of course something to support ;-) Looking at these elegant and unique watches always reminds me how precious our time is!

But now finally something about movies. On Tuesday my friends took me to attend the screening of the latest film of the successful South Korean director E J-yong which was without a doubt a highlight of my week. I was a bit skeptical when I first heard about our plan to watch a South Korean movie with English subtitles but "Behind the Camera" turned out to be an intricate feature about film making in which fact and fiction become rapidly blurred. To the plot about a film in a film E J-yong added an impressive cast of famous South Korean actors and a good measure of humor. After the movie I had the chance to get some more and very telling inside information from J-yong over dinner. There he admitted that "Behind the Camera" has yet to premiere in South Korea and that he was a bit apprehensive on how the actors would react to the the rather experimental style of his film.