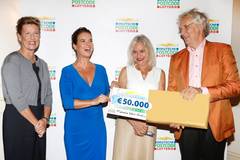 I am truly delighted to announce that since yesterday I have become the new national ambassador for the "Deutsche Postcode Lotterie" and that I have joined the ranks of the international ambassadors that include George Clooney, Rafael Nadal and Desmond Tutu among others. The "Deutsche Postcode Lotterie" manages the new social lottery in Germany from which 30 percent of the proceeds fund projects focussed on social cohesion, human rights and environmental protection in each respective German federal state.

It came as a big surprise when Boudewjin Poelmann, one of the founders of the Deutsche Postcode Lotterie, handed me a generous charity cheque for the Katarina Witt Foundation at the official certification of my role as ambassador. Through the work of the foundation which supports children and young people with physical disabilities, we have been able to sponsor almost 200 projects and assist a countless amount of children in gaining more mobility in their lives and in improving their life quality.

The motto of the Deutsche Postcode Lotterie is "TOGETHER WE WIN. TOGETHER WE HELP". What better way to do good deeds when people can now win while at the same time doing something good for others?