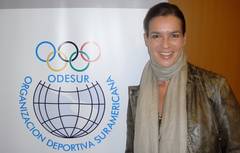 Yesterday evening the FIS Apline World Ski Championships were opened in Garmisch-Partenkirchen with enchanting pictures. While the audience falls into a collective delight, I struggle with the thermic shock from experiencing -30 degrees Celsius a few days ago in Kazakhstan and now +35 degrees here in the shadow of Sugarloaf Mountain in Rio de Janeiro. In Astana I was nearly freezing my legs off and here I have the feeling I am melting into the Portuguese mosaics of Rio's streets.

Instead of marveling at the colorful projections of the opening ceremony in Garmisch-Partenkirchen, I follow the reports of the annual results of the South American Sports Organization (ODESUR) whose General Assembly is held here. The air conditioning of the conference room is turned up so high that there is a little "Garmisch feeling" arising :-)

I am very excited about my first visit to South America. Rio is an amazing city between the sea and the mountains. A joyful atmosphere prevails. One can already feel the proud anticipation of the Football World Cup 2014 and the Summer Olympic Games 2016 here in the land of bossa nova and samba rhythms.

Rio is currently preparing these two big events with dedication. With our Munich 2018 mission we still have a lot of hard work ahead of us until then. Therefore I use the three days here to lead discussions and try to convince the delegates of our great concept. Apart from that I try to get rid of the long-haul flight fatigue in my legs with some jogging along the beach. During our sometimes quite adventurous racing drives from one meeting to the next I try to make a couple snapshots of the sights of this fascinating city hoping they won't turn out too blurry.