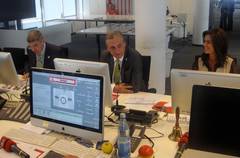 Invited by Alfred Draxler, deputy chief editor of BILD, Dr.Thomas Bach and I attend the morning editorial board meeting of the BILD newspaper at the Axel Springer building in Berlin. Over the next three weeks the largest European newspaper will support our Munich 2018 bid with intensive media coverage.

During an extensive interview, we have the opportunity to explain our concept and the advantages of our application for Munich, Bavaria and Germany. Before the interview Dr. Thomas Bach assesses the headlines and articles of today's BILD edition at the traditional paper critique during which all editorial offices in Germany are joined via video conference.

Photo 1: Dr. Thomas Bach and I shortly before the start of the interview with the BILD journalists Walter M. Straten and Thomas Sulzer.