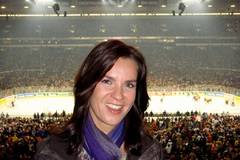 Today is the start of the 2010 Ice Hockey World Championship in Germany. The Organizers had the idea to hold the opening game USA-Germany in the Schalke soccer arena. This was a great idea! Not only did they manage to break the audience world record for an ice hockey match with 77.803 fans attending the game but the German fans also got to witness a sensational start into the World Championship with the victory of the German team lead by coach Uwe Krupp.

Ice hockey is one of the core disciplines of the Olympic Winter games. For the Munich 2018 bid the 2010 IIHF World Championship in Germany offers a special opportunity to show once again to the world our hospitality, enthusiasm as well as our organizational skills in hosting a major sports event. The organizational committee of the 2010 IIHF World Championship supports Munich's bid for the 2018 Olympic and Paralympic Winter Games and as chair of the bid I traveled to Gelsenkirchen to promote our goal. Of course I used the opportunity to support our team and I must say that the atmosphere in the stadium was deeply impressing for me and for our guests.