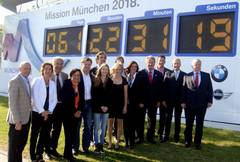 I have just returned from the World Conference on Sport and Environment in Doha and now take part in a panel discussion at the BMW World in Munich. The topic is  sustainability of the Olympic Games and the question "What would be the benefits of the Olympic Winter Games in Munich 2018?"

The BMW World and the AZ-München paper are our hosts today. With me on the panel are Lord Mayor Christian Ude, the former minister for environment and foreign affairs Joschka Fischer, sport icons Rosi Mittermaier und Christian Neureuther, the intendant of the Volkstheater Munich Christian Stückl and head of Munich's green party Katharina Schulze. Mrs. Schulze is critical of the Munich bid and the discussion about the pro and contra becomes somewhat heated. The public and strong support of the former head of Germany's green party Joschka Fischer for Munich 2018 is very remarkable. With his experiences as foreign minister he has a more global perspective and knows how hard the organizers in Asia fight for major sport events and how important Olympic Games in Munich would be for our young sport talents and our country as a whole.