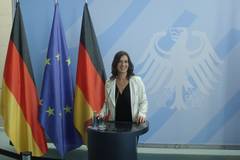 Don't worry, i won't hold another press conference at the Cabinett Office. But since I have the opportunity to visit the place were all the important announcements are made  I simply cannot resist to sneak behind the desk and pretend as ifâ€¦fortunately I am not the only one.

Today Chancellor Angela Merkel has invited all German Olympic and Paralympic medal winners of the Winter Games in Vancouver to thank them for their commitment. About 40 athletes take part in the 1 hour reception. Together with Willy Bogner, CEO of the Munich 2018 bid, I am also invited in my role as chair of the board of trustees.

Several speeches are held by Chancellor Angela Merkel, President of the National Paralympic Committee Germany Friedhelm Julius Beucher as well as athlete speakers Tatjana Hüfner, Olympic luge Gold Medalist and Verena Bentele, 5time Paralympic Champion. At the end Dr. Thomas Bach, IOC Vice President and President of the DOSB (German Olympic Sports Association) noted to the Chancellor: "We hope you will not forget sports, except at the forthcoming government talks about savings in the budget."