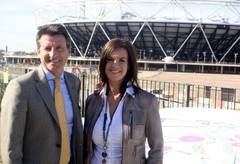 It is astounding how full the sports calender can be every year. On all continents conferences, fairs, competitions and general assemblies take place. A year ago I attended the SportAccord for the first time in Dubai. Back then everything was new to me and I felt like a rookie. Meanwhile I have learned a lot more about the world of sports and now we attend the SportAccord in London with a special mission. This international convention is the biggest sports fair worldwide bringing together more than 1500 leading sports representatives. Today we present our bid for the Olympic Winter Games 2018 for the 6th time in front of an international audience.

Our delegation arrives in London on April 3rd. We use the days until our presentation for preparations, talks with IOC members and important representatives of the sports world as well as interviews for the international media. During our presentation we focus on our concept of offering the best to the athletes. We try to bring across how cheerfully, passionately and fairly the German sports audience supports all athletes. We show our ability to organize major sports events. Our Games will be the Games of short distances and with an unique and exciting atmosphere in sold out arenas as well as in the cities of Munich and Garmisch-Partenkirchen. On top of this we also talk numbers this time. We are at a fair after all and economical issues play an important role. Among other things we point out that over the last decades the German industry has supported international sports competitions with a tremendous financial effort. Currently German companies fund 50 % of the revenues of the seven winter IF´s (International Federations) on the Winter Games Program.

Apart from the SportAccord I am looking forward to another highlight on this trip for me personally. Sebastian Coe, British two time Olympic Champion over the 1500 meters and chairman of the London Organizing Committee for the Olympic Games, takes me on a tour through the Olympic Park. During the Olympic Summer Games next year the Olympic Village, several competition sites as well as a wide area for sports fans will be located in this Park. It is still a huge construction site at the moment but I can already imagine very well how it will look like once finished. The Organizing team and especially Sebastian Coe have done an amazing job. They will present very green and worthy Games. On the photo you can see Sebastian and I in front of the new Olympic stadium.