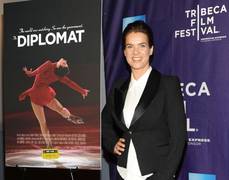 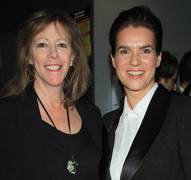 Today I attend a special screening of the documentary "The Diplomat" conceived for the ESPN series "Nine for IX". This event taking place in the frame of the Tribeca Film Festival in New York City is the premiere of this documentary narrating my ascension to fame at the height of the Cold War and my struggle to secure a future in my homeland before and after the fall of the Berlin Wall. The ESPN initiative "NINE for IX" chronicles women in sports and I'm very proud to be part of this interesting series.

For this documentary the directors Jennifer Arnold und Senain Kheshgi interviewed me and people who have accompanied me or crossed my path, among them my coach Jutta Müller, Olympic Champion Brian Boitano and the former head of the GDR Egon Krenz. When I saw "The Diplomat" for the first time I was deeply moved by how passionately Jennifer and Senain told my story. Interestingly both of them didn't have anything to do with competitive sport before and they also had to thoroughly research the history of the GDR to fully understand the complicated hierarchy within its system. "The Diplomat" will be aired on ESPN on August 6, 2013.

"This is, by any measure, a engrossing hour - mixing history with sports as effortlessly and gracefully as Witt appeared on ice" - The entertainment magazine Variety on "The Diplomat"

Photo 1: Tribeca Film Festival in New York for the premiere of "The Diplomat"

Photo 2: Together with Jane Rosenthal, the business partner of Robert DeNiro, who has produced "The Diplomat"