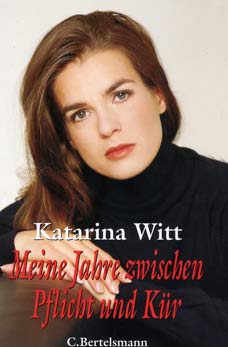 "My Years between Compulsories and Freestyle”

At the age of 28, I was writing my Biography. I felt I was way too young for this, however, I felt compelled to write about my life, my history, my past and wanted to tell it myself.
I had to tell it.
In 1993 civil rights activist made a public accusation against me of having worked for the State Security Agency (Stasi) and betraying my friends. I didn't want to have this lie and accusation on my back anymore. Hence, I gained access to my files and through them, my childhood and teen-age years in the GDR.
At least the things that are recorded in black and white within the over 3.000 pages which were written about me.
I won the liability case. But it frightens me, the ease and impertinence with which a complete stranger could point the finger at someone and have their undivided attention without being aware of the consequences. It showed me the dark side of being famous.
You become an object of projection for all kinds of people who have never even known you.

Between Privilege and Limitations

Having had access to my files, I realized the State Security already had me in their sights when I was a seven-year-old figure skating student. For years I "the W" a.k.a. "Flop", was observed, spied upon and manipulated. I took the nasty accusations that day as an opportunity to take a look into my past. It was a look back into what were secret files up to now. In my biography I take stock of my life as a figure skater. I often tell about my path to success in sports and of the so-called privileges that it gave me, and the price I had to pay for that: The observation and being followed into the most private places. There are both sunny and shady sides to this part of the German past.

My Life as a Figure Skater

My Biography was written in the same year in which I had hoped to qualify once more for the Olympic Games in Lillehammer, 1994.
The preparations were complicated enough. Hardly anyone believed I would participate. I would have preferred to concentrate fully on my training, but these accusations were hovering over me and I was compelled to write my biography in my own defence. Now, I hate things that are done half-way.
So, for most of the summer, I was sitting in my garden with Edgar Fuchs, the ghost writer, telling him about my past. I don't want to know how often he wanted to take to his heels, tired stiff of my stories about figure skating costumes, my weight problems in the past, exhausting hours of training with Mrs. Müller, heartache and girl stuff. Looking into my past made me happy, despite the horrifying knowledge of my Stasi file. The result was a book, in which I do not attempt to justify anything about myself, but rather, give the reader a chance to get to know the real Katarina.