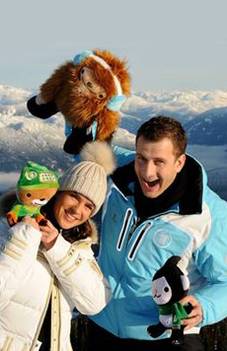 During our cooperative filming in 2009 for the ARD special "One Year to the Olympics" , with Rene Kindermann in Vancouver/Whistler 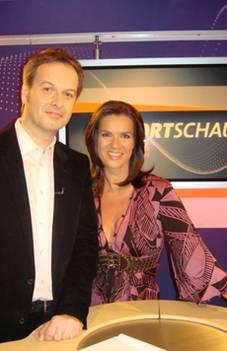 Claus Lufen and I reporting during the World Championships in 2009 in Los Angeles from the Frankfurt Studio. 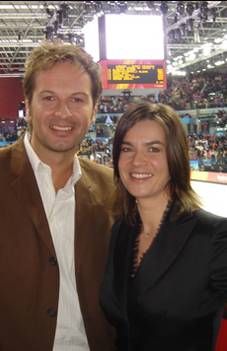 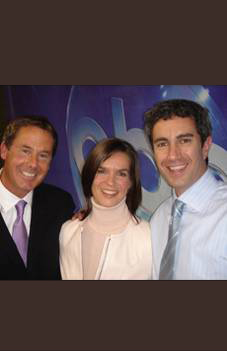 As ABC Expert in 2005 with Peter Carruthers

World Championships in Vancouver in 2001 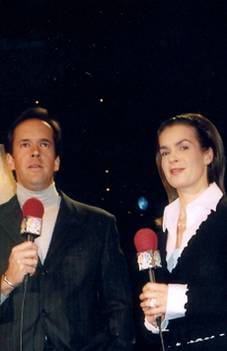 NBC Moderation for my show "Divas on Ice" 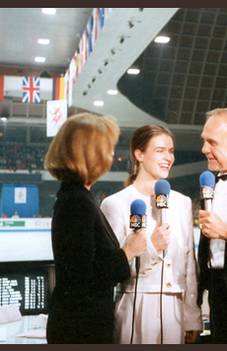 World Championships in 1993 in Prague for NBC 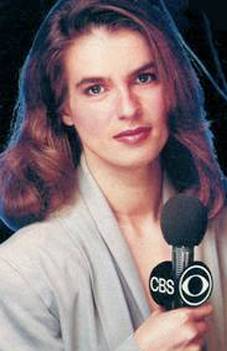 Olympic Games in 1992 in Albertville for CBS

Aside from all the ice shows, the daily training and innumerable obligations, I was also asked, quite early on in my career, to appear as a figure skating expert on several different television programs. On American television, there has long been a tradition of including athletes who are no longer competing, and the German stations have begun including more and more athletes as well.

Because I have lived and breathed for the sport of figure skating since my early childhood, and for years as a young girl, dreamed of standing on the podium, figure skating has become a part of me, and I consider it, of course, to be the most beautiful sport in the world. The TV stations love to work with athletes, precisely because they can explain to the viewing audience the athlete's world, the endless training, the almost unbearable pressure they have felt during competition, the agony of defeat or the joy of victory, with the most credibility.

It's 1991. I am at the World Championships in Munich wearing a headset for ZDF. In the USA, after the fall of the wall in 1989, I have become somewhat of a symbol of freedom and am presented as living proof that the Berlin Wall is gone. Particularly because of the popularity of my sport in the USA and Canada, and also because I made such an impact on the figure skating world during that decade, CBS, an American television station, was the first to ask me to moderate with a microphone at the arena during the Winter Olympics in Albertville in 1992.
Whew! Meanwhile, my English is quite good, but back then it was a different story. That's why I brought an English tutor along for that particular event, and studied intensively.
It was the first time I ever attended the games without skates. Along with Scott Hamilton, Tracy Wilson and Verne Lundquist, I experienced the competitions up close, enjoyed late evenings with my colleagues at the pizzeria around the corner, and watched the games with a whole new perspective.
It was interesting to see the games from the perspective of the media and to be there live, as my successor, the American sweetheart, Kristi Yamaguchi, became the Olympic champion. I wholeheartedly revelled in her success and came to treasure her friendship later when we were touring for shows together for many years. I like to refer to her as my "American sister", and I am, in turn, her "German sister".

I proceeded to work with the Americans on NBC during the World Championships in Prague in 1993.
At the Olympic Games in 1994 in Lillehammer, I was, once again on the ice as an Olympic competitor, and in 1998, during the games in Nagano, I was in Paris for the filming of the Hollywood movie "Ronin".
Since the World Championships in Nice in 2000, I have worked as a figure skating expert for ARD, travelling to Salt Lake City in 2002, Turin in 2006, and in 2010, I have been going to Vancouver, as well in 2014 to Sotchi, on assignment for that station. It's hard to believe, but I am actually very glad I am no longer the main focus on the ice at competitions and the centre of attention for millions of spectators. I know all too well how it feels to be an aspiring medallist and how the expectations of an entire country can almost smother you and the world around you shrinks into a microcosm. The crucial four minutes of your free-style seem to be the most important thing in the universe. The silence before the music starts, the blink of an eye, this tiny bit of eternity turns you into the loneliest person before everyone's eyes. And yet, despite all this, I still feel a bit nostalgic whenever I watch it at a safe distance.