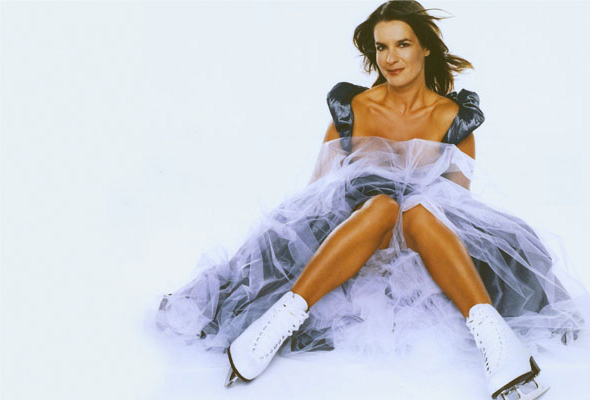 Not only does Katarina Witt guarantee higher viewer rates on talk shows and big entertainment programs, but she is also frequently requested to appear at big international figure skating competitions, due to her professional competence in this field. Furthermore, she often moderates at various galas and television programs on ARD, RTL and Pro7.

Since 1991, she has worked as a successful and experienced figure skating expert. For this task she is more than pre-destined, due to her career and ability to judge. After her first time to work as a journalist for ZDF in 1991, she was asked by the American broadcaster CBS to host the Olympic Games in 1992. In the following years, Katarina Witt has made herself available for other American stations, such as NBC and ABC, as well as the German broadcast station ARD, to share her professional knowledge at World Championships and Olympic Games with charm and enthusiasm. Now she is looking forward again to continue her task as the figure skating expert in cooperation with the approved team of ARD for the XXIII. Olympic Winter Games from 09th till 25th of February 2018 in Pyeongchang, South Korea. Meanwhile these are her 6th winter games as an expert.

Katarina Witt moderated the "German Film Awards" in 1998, and received a "Bambi" in 2009 for her work at ARD. In 2006 to 2008, she landed her own big television show on Pro7, which she herself conceptually devised and co-produced with her production company WithWitt, and also moderated. During the "Stars on Ice" season, she is back in her "cold" element, helping her celebrities however she can, and maintaining her humor and spontaneity throughout the live two-hour prime time show. In 2008, the weight loss show, "The Biggest Loser" ran on Pro7. As sport has, after all, influenced her life significantly, Fitness and good nutrition are a part of her daily regime. That's why she accompanies the candidates on their journey to a "new me" at the weight-loss camp in Budapest, and moderates the votes for new candidates live in Cologne.